I decided not to deal with El Camino right now. To be honest, "Lonely Boy" didn't really grab me, and it's completely unfair to evaluate a CD after seeing The Alabama Shakes do their thing.

The band made a splash at SXSW and CMJ, but they basically came out of nowhere. (Well, obviously, they came from Alabama.) If you listen to this interview, things just magically fell into place for them.

As it should have. The Shakes' blend of blues, soul, rockabilly and gospel is as powerful as any music out there. The music takes you from the lowest point you've ever been at all the way to sublime enlightenment (see "Hold On" below.)

As for their concert...well, don't ever miss an opportunity to see them ever again. At one point, the band had to pause to figure out some technical detail. When lead singer Brittany Howard returned to the mic, she excused herself because she had "started to think about what I was doing" before launching into another scorcher. And that's clearly how the band approaches their performances: they're simply captured in the pure joy of performance. This joy, of course, was transferred to the audience. Any band that gets as many people dancing in Williamsburg (where unadulterated joy goes to die) is obviously doing something right.

But don't take my word for it: 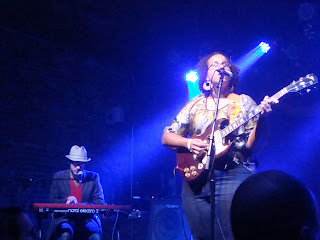 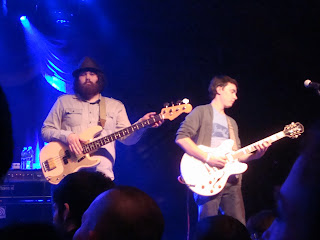 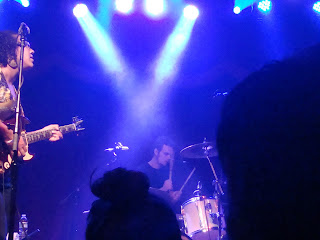 And here's a comically horrible video of their song "Hold On," which will undoubtedly get some radio play or I'll eat my hat. I didn't realize holding the camera vertically would make everything sideways so...tilt your head. I'm sure some nice person has already put their vastly superior video on YouTube.

That being said, if this video (and the song) doesn't make you believe in the redemptive power of rock'n'roll, then you are too far gone for anyone's help, you sinner.

Email ThisBlogThis!Share to TwitterShare to FacebookShare to Pinterest
Labels: concerts, The Alabama Shakes