So here's something that's going to make all of us feel old: as of this August, I'll have been a fan of Cowboy Mouth for exactly half as long as I've been alive.

I think if I were to talk about how much this band has affected my life (definitely for the better) it would turn into a memoir. I tried to address it here, but it was pretty rambly. The short version is that I am who I am today because of them.

Cowboy Mouth was the first rock concert I ever went to, and I've been thoroughly spoiled every since. How many concerts do you go to where the drummer/lead singer climbs up onto somebody's table while they're eating (why would you eat dinner during a rock concert? Or sit at a table? These are things Cowboy Mouth has taught me not to understand) and harangue the audience into dropping their guard and not being afraid to act like total goofballs? 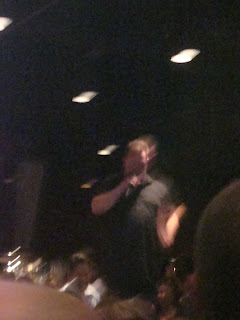 This little spiel is especially important in the Northeast, and particularly in New York City. None of the cool kids want to dance at concerts these days.

These are the two big takeaways I've learned from Cowboy Mouth concerts over the years:


BB King's is a good home for Cowboy Mouth, and Fred and the gang seemed please that we were all old hats when it came to the Cowboy Mouth experience. 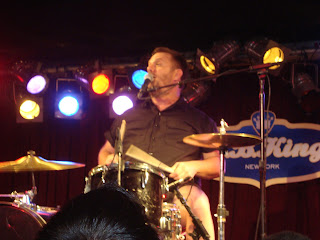 Fred LeBlanc on vocals and drums -- the human dynamo.

There's not much I can say about a Cowboy Mouth concert that hasn't been said before. The band combines their songs of hardship and woe with powerful life-affirming messages, call-and-response, sing-alongs, ritualistic practices like hugging the stranger next to you at the beginning of the concert, and throwing red spoons at the stage during a certain line of "Everybody Loves Jill" (though that last one is more of a fan tradition.) In other words, I think we should all be glad that frontman Fred LeBlanc chose to write music instead of stumping for a megachurch; his gift is too powerful to be used for the forces of evil.

And after 22 years of playing 300+ shows per year, it's always refreshing to see that Fred and Griff (the remaining founding members of the band) still have it. To my gratitude, they opened the concert with a medley of the crowd-pleasers from their newer material: "Kelly Ripa" and "Glad to Be Alive" stand out to me here. "Kelly Ripa" is probably the most insipid song known to this side of Top 40 radio, and I was relieved that I didn't have to listen to the whole thing. Once they breezed through the newer stuff (as if to remind us that it exists) the band settled down to the material in their catalog -- new and old -- that was worth our attention.

Really, the only thing they could have done to make it my dream set-list would be to add "Tears Toward Heaven." I know you guys are gonna read this, and you know I've been requesting it for the last ten years. Just do it already. 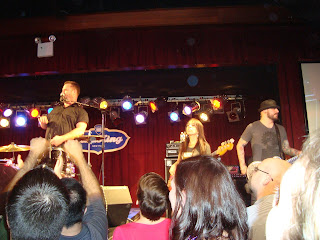 As always, I left the concert feeling great. It seemed like nothing could bring down. And, as always, I'm suffering my 24-hour withdrawal. But for that one-and-a-half-hours on Friday night, I got in touch with my twelve-year-old self again. I was like, "How's it going?" and she was like, "I'm glad you're not too cool to hang out with me!" and then I was like "That's never gonna happen. Just wait until Adventure Time comes out." 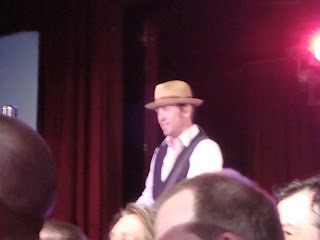 I took a really blurry picture of lead guitarist John Thomas Griffith. Just for you.

So really, you should keep an eye out for this band. I made a little playlist in the older Cowboy Mouth entry so you can get a feel for their music. I will champion this band no matter what, and I've been doing that since I was 12. I named this blog after one of John Thomas Griffith's songs. Cowboy Mouth might not be edgy, or dirty, or rough, or mean, or tired, but how many of those bands do we really need? (Lots, because that's who I mostly talk about here.) Life is serious, but that doesn't mean we have to be. So keep an eye on those tour dates -- I promise they'll be near you at some point sometime (as long as you're in the continental US) -- and go to one of their concerts. If you don't feel happy and re-energized I will refund your ticket. (No! Really!) And then I'll suggest you seek counseling.

Cowboy Mouth Official ...and you know where to find the rest.

(New readers! Please help me get to 50 "likes" on Facebook by March! Thanks for stopping by!)

Posted by Rachel Cholst at 2:04 PM