I've seen too many criminally under-attended concerts in New York and Philadelphia. It's enough to make me want to move to New Orleans, where people actually appreciate music for music's sake.

But then I wouldn't get to see Jo Wymer play live. 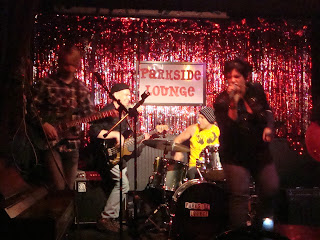 The band played to a small room of about fifteen people -- four of whom had just played a show at the bar down the street. I wish I had found out their names, because if their music is as fun and awesome as they are, then they deserve to be up here. It didn't help that the Parkside Lounge -- the self-proclaimed champagne of dive bars -- treated its back room as an actual lounge. My first concerts were Cowboy Mouth shows, so the concept of sitting down at rock concerts is pretty alien to me. 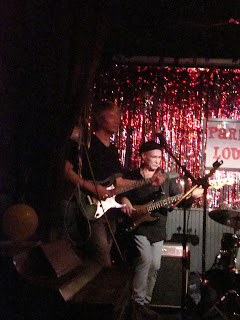 But that's not to say they didn't play their hearts out and that we didn't have a great time. I should've known better than to hope I could capture the Steve Romanowsky's serene joy and the Gene Boccia's grins with my little camera. (You can kind of see it in the shot above.) 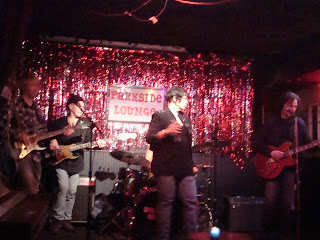 As a group, the four musicians were extremely tight and, when it came down to playing solos, gracious to each other. (Jo left the stage during the Marc Ribler's skillful solos.) However, they seemed most energetic when performing covers: a smoking version of "Moulin Rouge" and a heartwrenching rendition of "Stormy Mondays." It seemed to me that they were willing to be more spontaneous and playful with these songs than Jo's original material. I expect that as the band continues to play live, they'll build even more confidence while playing Jo's work. And then they'll really be an unstoppable force.

Don't worry if you missed the concert. They'll be playing at The Alphabet Lounge on March 10. And hopefully there won't be any of that weird table service stuff.

Jo Wymer Official, Facebook, G+, Buy Living With Scars (which you can do on basically every platform except Spotify)