The headliner for this afternoon concert was a band called Shoot the Freak. I wasn't too impressed and, unlike the majority pre-teen audience, I had homework to do. But what that band (a competent attempt at trashy 70s glam rock), Theo Katzman, and Charlene Kaye all have in common is that they're Darren Criss's college buds. I don't particularly care about Darren Criss -- in fact, I don't even really know who he is. But none of the three performers would let us forget about their connection to him, so it seemed worth mention here. It would be unfair to say that Theo and Charlene are riding on their friend's coattails, but they're certainly milking it for all it's worth to their younger fans. Some friends of mine were in town from Germany and were super stoked to see them, so off I went for my first concert of 2012. 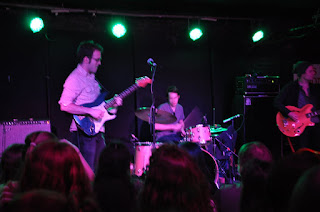 Theo Katzman, who opened the concert, brought a whole lot of charm and energy to the stage. His backing band was amazing (more on that later.) Katzman's lyrics are sincere and heartfelt, his stage persona is goofy, and his music is completely palatable. I don't have much to say about his music: it's pretty basic suburban dude rock music. File under easy listening, Ben Folds. But while he won't exactly reframe the way you think about music, Katzman is adorable and relentlessly optimistic. 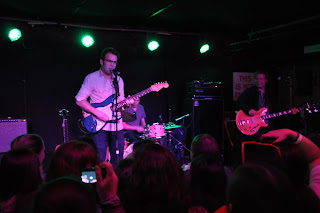 In that sense, the concert taught me a thing or two. Your music doesn't have to be groundbreaking or angry to make it "real." Not a bad lesson for my first concert of 2012. I definitely recommend seeing Theo Katzman live -- he's having a great time and you'd have to be an ogre not to leave one of his shows without a smile on your face. Also, his bassist, Tomek Miernowski is a powerhouse. As you can see in the above picture, he was completely thrilled to play a power-pop bassline. Someone needs to give the man his own rock band. Unfortunately (for me) his strengths tend to lie more heavily in some really interesting jazz improvisations.

For some of Katzman's unrelenting optimism, treat yo'self to this:

Charlene Kaye also taught me a thing or two. The first time I saw her was at the Tinderbox Music Festival in Brooklyn. And, to be honest, I thought she was incredibly disappointing. Just another woman with like a million keyboards. Maybe it was the fact that there were actually people at this concert (why weren't you at Tinderbox, exactly?), or the superior backing band (Theo played bass and Tomek switched to guitar) but I was blown away this time. So there's something to be said for second chances. 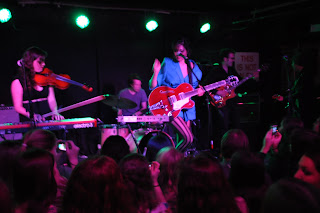 It's hard to describe Kaye's music. Like Katzman, it's inoffensive. But what really distinguishes Charlene Kaye is the imagination behind her songs, and the worlds she creates in her songs -- for example, a particularly poignant love song on her upcoming album (mixed and produced by Tomek) about a lonely narrator searching for her soulmate...which eventually presents itself as an alien (really.) Only one other song stood out to me, and if you've already listened to the Monday Mixtape then you've already heard it. That being said, it's all pretty great and I'm glad I got to see her perform in a more optimal setting. 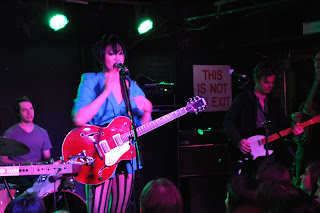 But for your convenience, I'll stream it here: