I don't really get Southern gothic stuff. There are a few reasons for this: 1) I'm not a Southerner, 2) I may be a little cynical (I mean, I'm from New York City forcryinoutloud), but I'm not morbid, and 3) I had a lame ex who was really into Murder by Death.

And then Thee Shambels, a Brooklyn-based, self-described "folk noir" band landed on my doorstep. 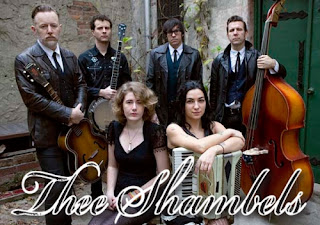 And you can get four songs for FREE until midnight of the 31st. All for the price of your e-mail address.

"Baby's Bones" is a fairly typical ballad about burying a lost loved one in Ye Olde Pioneer Times. "The Girl at the Bottom of the World" is a whimsical tune. I mistook it for a love song at first, but I should have known better. "The Road To Hell" actually is a love song (I think?) but the narrator's trouble with the law dooms it to fail. "Jenny Come Back" is my favorite of the bunch -- just because one should always be armed with compelling reasons to abandon the West Coast for the Best Coast (that's this one.)

So what was it about this EP that really grabbed me? For one, I think it's the stylistic diversity among the songs. None of the four sound exactly alike, and that keeps Thee Shambels from becoming too heavy-handed. Also, singer Neville Elder's voice. It sounds like Bourbon and cigars and class. It's enough to make me wish I was a 40-year-old Englishman.

So drink up that Kool-Aid. And if you have any more "folk noir" to suggest that, like Thee Shambels, is not overburdened by gimmicks, send 'em on to me.


Thee Shambels Official, On Facebook
Posted by Rachel Cholst at 1:00 AM