First things first. Housekeeping notes: I realized that my Sonia Tetlow post marked the one-month anniversary of this blog! Things have been going great so far and I'd like to thank you all for reading. However, I'm really serious about turning this blog into A Thing and in order to do that, I need to be able to brag to artists and record labels that lots of people from lots of places read this blog. So, if you're new: welcome! If you're not, welcome back! Regardless, please like me on Facebook. I'd love to get to fifty "likes" by March.

For those of you keeping score at home, this album was featured in my top 3 of 2011 post. I'm excited to tell you more about it now. 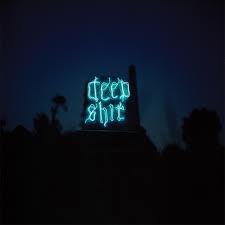 But I dunno. Maybe you should just listen to the songs first? Because they're fucking amazing? OK? OK.

This album is honestly the best six dollars I have ever spent (I got the digital download.) Everything about this album is breathtaking. Everything. The lyrics are astonishing, the music is emotionally charged, and Ryan Davis's vocals (leastways I'm pretty sure that's who's singing) are simultaneously desperate and hopeful. When I first downloaded Deep Shit, I listened to the entire album on loop for three hours and didn't get tired of it. Even now, I have to listen to some songs a couple of times in a row. Mostly because I don't want the song to end. Ever.

It's excruciatingly difficult to pick any one lyric to showcase their lyrical prowess. I always hear or discover something new when I listen to these songs. So for now I'll just give you the first verse of "Old Green Room." (Any mistakes are mine.)


What does it mean? I have no idea. And that's what appeals to me...State Champion's music, in case you haven't figured it out, is irresistibly mysterious. And maybe if I just listen to it one more time, I'll finally get it.

Also, their fans are really fucking entertaining but you're not gonna get any of those jokes until you buy the album, so do it.

Though they're based in Louisville and Chicago, State Champion will be making its way to the Northeast in late March/early April. I hope we're all prepared.

Don't forget to get me to 50 "likes" by the time State Champion gets here!