I can't say I'm really late on this one. Manifesto came out back in June, but since I wasn't blogging then, I can tell you about how great it is now.

The thing I've most enjoyed about blogging so far is getting introduced to so much new music all at once. The thing I've least enjoyed is that I keep getting introduced to so much new music all at once. I've found that it's easy to find music that catches your ear, but it takes a little more time for that music to settle into your heart. There are a couple of folks featured on here who I'm fairly certain I haven't listened to since posting about them (I won't say who.) That doesn't mean they're bad -- if I thought they sucked they wouldn't be on here -- it's just that there's a lot of music to sift through, and that's never a bad thing. However, Matt Woods Manifesto holds a coveted place at the top of my CD pile. 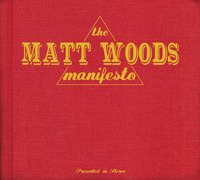 This album was my introduction to Matt Woods, but it seems to me that the title is apt. All but one song on Manifesto knocks it out of the park (which I'll get to in a minute.) I recently revisited the CD and decided I had to commit every word to memory. No lyric is wasted, no note is misplaced. The crowning achievement of the album, to me, is "Johnny Ray Dupree." There's no shortage of songs about jealous lovers who do rash things, but anyone who can make that lover into a tragic hero instead of a testosterone-soaked asshole deserves the highest praises. Kudos to you, Mr. Woods.

And that's why I'm not so in love with "Friday Night," which is a fairly standard "let's get fucked up" song. When a song like that is bookended by complex songs like "Johnny Ray" and the serene "Port St. Lucie," it can't help but come off as somewhat shallow. However, it's a great song by itself, so that should give you an indication of how amazing the rest of the album is.

Hie thee to Spotify, then hie thee to his official website, where you can get a bonus CD with your purchase.