Concluding our week of drrrty blues is the best thing to come out of British Columbia since Stargate. (I set the bar really high. I'm serious.) The Pack A.D. is not especially bawdy in terms of its lyrics, but all of those distorted guitars and vocals start to get underneath your fingernails. 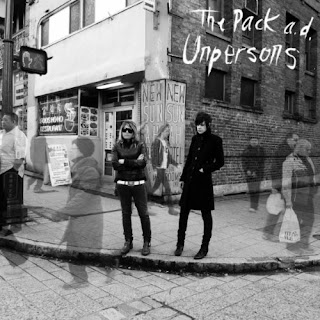 The Pack A.D. is reminiscent of Sleater-Kinney and the Black Keys. The Sleater-Kinney comparison is not because they have lady parts (though, as sexist as this is, I would argue that only female rockers can express the raw ferocity of the riot grrl movement.) The Pack A.D's music is raw and almost dangerously chaotic in a way that I've only heard on Sleater-Kinney's last album, The Woods. The blues influences (less prominent on Unpersons) clearly invoke The Black Keys.

Like the Black Keys' most recent album, Unpersons is more accessible and dance-able than the band's previous work. Unlike El Camaro, Unpersons manages to retain the integral core of what The Pack A.D. is all about. On its own terms, most of the songs on Unpersons ditch the blues influence for straight-up punk -- as you can see in "8".

If for some reason you don't already have Spotify, The Pack A.D. should be enough of a reason to download it. Their entire catalog is on there, and you don't want to miss out on it.

Email ThisBlogThis!Share to TwitterShare to FacebookShare to Pinterest
Labels: Sleater-Kinney, The Black Keys, The Pack A.D.