In case you've missed it, this week is Japan Week on Adobe and Teardrops. It's just my small way of honoring the anniversary of the March 11th earthquake. Please donate a few dollars to the survivors.

You probably woke up today and though, "Cool! It's an update day for Adobe and Teardrops! This Japanese music is cool and all but I wish Rachel would get back to posting Americana stuff." And then you read this entry, which is about a rockabilly band called Blue Angel that hails from Tokyo.

I wanted to get a group shot, but the band's website is...subpar. So here's one of bassist Norihiko Enomoto in a rather fine jacket, with lead singer Akiko Urae in the background. 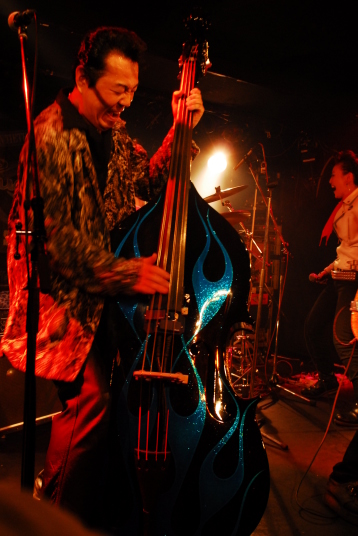 I found out about quite by accident. The city I lived in, Nagoya, is not exactly known for being cool or having a lively arts scene. Or anything, really, except wealthy Toyota executives. So one day when I was in the cheapo shopping district, I found a really amazing record store on a random street in the neighborhood. I spent the majority of my time in this neighborhood, and this was one of the last couple of weeks before I went home. It came to my like a sign.

One of my hobbies while I was in Japan was going to used CD stores and picking out random CDs based on the cover and how ridiculous the band's name was. The only CD I purchased this way that wasn't fucking terrible was Blue Angel's Eden. Which was in the Rockabilly section. Because that's how great this store was -- they only sold music that aligned to my musical tastes. No pop, no hip-hop...if they hadn't had a metal section I would have tried to buy out the entire store.

I was completely tickled by the idea of Japanese rockabilly. There were a bunch of other bands in that section. But, I'll admit it, I went with Blue Angel because I thought Akiko Urae was hot. 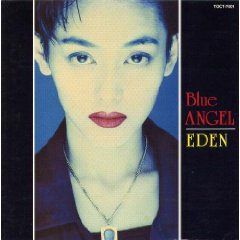 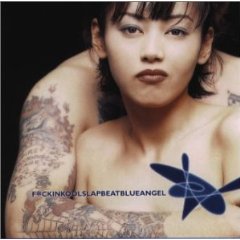 I mean...are you really gonna blame me?

And, 25 years later, she and the rest of the band are remarkably well-preserved. However, the novelty of a bunch of Japanese people playing quintessentially American music is not what keeps this band interesting. It's not surprising to me that they're still together -- just from the recording it's easy to see how happy they are playing their music.

I had to jump through several hoops to find the band's official website. I'm afraid there isn't too much information about them out there -- and almost certainly not in English. But I believe it's possible to get their CDs on Amazon. If one were to express interest in the comments section, I could brush off my Japanese and tell you what I find.