High Dive is a queer punk band from Bloomington, Indiana. 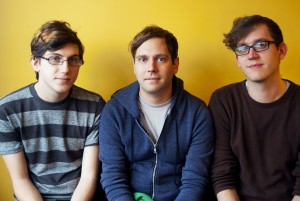 This shouldn't be an especially shocking sentence in this day and age, and to most of you it probably isn't. But here's a question for you: how many openly queer artists under the age of 40 can you name -- particularly in punk? Beth Ditto? Anyone else? What about male-identified artists?

Unless my ear is pressed to the wrong part of the ground (which is entirely possible) queer punk, like queer activism in general, fizzled away in the face of the Bush administration. Sure, we have successful campaigns for marriage equality and we've overturned DADT (for now) but compared to the injustices LGBTQ Americans face in the civilian world -- rampant employment discrimination and a blind eye to hate crimes -- these movements are merely cosmetic.

Similarly, there have been numerous artists in recent years who have come out but have managed to downplay this aspect of their identities -- Tegan and Sarah, Brandi Carlile, and Lady Gaga come to mind. On the other hand, Chely Wright's outing was controversial -- precisely because her core audience (and record labels) could not see past its own bigotry. Note that there are no men or trans-identified individuals mentioned here. While it's great that most artists no longer need to be ghetto-ized into the queer music scene in order to be out in their work, I take the Rachel Maddow approach to being out: you're really doing more harm than good by remaining closeted. And closeted people are boring (I mean, really. You should have met me in high school.)

So when I asked High Dive if they wanted to be identified as queer, I was pleased -- perhaps selfishly -- by their response: they told me they wanted to be known as a queer punk band because they wanted to write the songs they wished they had heard as teenagers. They pull it off. I wish I had had these songs as a teenager. High Dive is warm, courageous, and current -- a far cry from the isolation and frustrations of '90s queercore and riot grrl, which was all I had to go on in the early aughts.

But there is still anger here -- and that anger is well-placed. As "Tennessee" points out, things really aren't that bad. There's been a lot in the last twenty years that has enabled queer punk discourse to move from hardcore to pop punk. But we are still persecuted and silenced -- in all too many instances to the point of suicide.

This is why I think "Tennessee" is the standalone track off the album. Not only does it encapsulate what the band stands for, it also captures the current mood of the LGBTQ community: sadness, disappointment, and courage -- because the light at the end of the tunnel is well within our reach.

You can download the album for whatever price you choose, but I recommend chipping in five bucks. Let's make queer music for a new generation into a Thing.