I was worried about The Alabama Shakes. They've ridden a year-long tsunami of hype that has catapulted them to fame. I'm not exactly sure if they've even stopped touring since they first broke big last summer. As I wrote back in December, it's not for nothin'. That concert was practically a religious experience. But could they bring that raw joy to their recording? 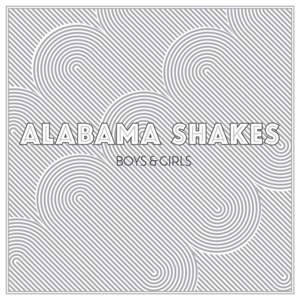 It's a rare band that can achieve excellence in both its live performances and its albums. It's easy to focus on one and let the other support whichever is its strength.

Fortunately, The Shakes have sidestepped this pitfall. While the album itself does not elicit the same ecstasy as an Alabama Shakes concert, it showcases the band's talent in ways that would not necessarily be found in a live setting. Namely, the album allows for more focus on the lyrics -- I'm so blown away by Brittany Howard's vocals that I have a hard time concentrating on anything else. I wouldn't say these songs are meant to be lyrically challenging, but they express a sensitivity towards life that is worth including in the list of Things The Alabama Shakes Do Right. (Which is basically everything.)

And that's the thing about this band -- it's not so much their music, which is nevertheless accomplished -- but they are truly an experience. They gel together in a way that's fun to watch, and their happiness as they play live is infectious. Boys & Girls adds another dimension to that experience -- a chance to get better-acquainted with the music, and an opportunity to hear The Alabama Shakes in a less frenetic setting.

You can stream the album here.

Hey, kids! I'm feeling a little unloved on Facebook! If you haven't "liked" my page yet, go ahead and do that in the upper right corner. Spread the word to your friends! Let's get to 50 likes by Friday night!
Posted by Rachel Cholst at 2:27 PM

Email ThisBlogThis!Share to TwitterShare to FacebookShare to Pinterest
Labels: The Alabama Shakes