First, some housekeeping notes. I'm going to put aside the Sunday Basics column aside from now. Stats show that I don't get too many visitors on Sundays, and at the moment I need to devote my writing to cover letters and job applications. Maybe I'll do a Sunday Funday playlist or something instead. What do you think?

Anyhoo, I am super stoked to tell you about this band and their tunes!

Scheduled to be released TOMORROW via This is American Music, The District Attorneys' Slowburner is a tasty pop confection. 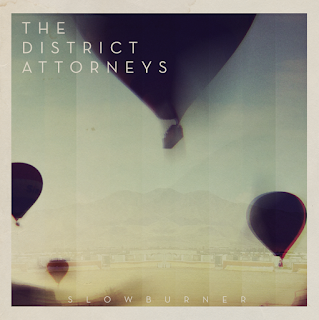 Between their record label and their hometown cred (Atlanta, Georgia, doncha know) I was expecting more of a twang. There isn't, and that's completely OK with me. As I listened to the album, my first thought was "Huh. I miss this kind of music." It's fun, jangly, carefree. The District Attorneys sound like they've walked out of Athens, GA circa 1995. It's like nobody told them the indie rock of the 2000s happened. And wouldn't we all be happier that way?

But the poppiness of the album shouldn't deter you. The music is fun, but deceptive: the lyrics in "Confusion of Trust" and "Worry About Your Health" are sharp and thoughtful. I would go as far to say that if Better Than Ezra had any shred of artistic integrity left, they would sound like The District Attorneys.

There's a real sense of joy on these recordings. However, I would say the band really shines on the two quieter songs on the album, "Cherry Fire" and "Here's Your Star." Without the swagger of the dancier tunes, we get to hear the band's core: irresistible hooks, authentic emotions, and lyrical sensitivity.


It doesn't seem like there's a place to pre-order the album, so make extra sure to remember to buy it on Tuesday. Like the Adobe and Teardrops Facebook page or follow me on Twitter (both buttons conveniently located to your right) and I'll be sure to send you reminders. While you're waiting for the album to be released, you can download their two EPs for FREE on Bandcamp.