I'm almost tempted to cheat and say that this is the best album of 2012, even though it was released back in November. It's because I didn't even know it existed until this week -- a criminal oversight, I know. 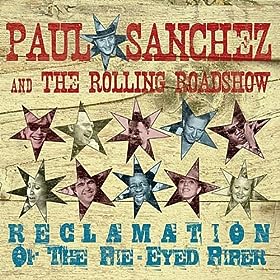 Here's what happened. Even though I'm a die-hard fan of anything related to Cowboy Mouth, I kind of let him slip off my radar. Not because I don't love his music -- far from it. It's just that I had an awkward experience after listening to his first post-Cowboy Mouth album, Exit to Mystery Street. I was struggling with a particularly bad bout of insomnia and listening to it as I tried to fall asleep. After five (count them) songs in a row about recreational substance abuse, a Spanglish song about smoking marijuana comes on and I fall asleep thinking "Woah! I understand Spanish! There's a part of my brain that understood it all along, but it took Paul Sanchez to unlock it for me."

When I woke up and remembered that I kind of freaked out a little bit, and somewhere between that moment and now I lost the album. (But I found it last weekend and fell asleep at about the same point in the album last night.)

Then Paul had to go and release seven more albums (one of them a double) between 2005 and 2011. For better or worse, losing everything he and his wife owned during Hurricane Katrina has served as a gigantic creative push for Paul.

Paul's band/musical collective, the Rolling Roadshow has wowed audiences all across the Southeast (won't y'all come up here?) With a rotating lineup that often features Cowboy Mouth alumnae Mary Lasseigne and Sonia Tetlow, the pure joy from creating music practically bursts out of these recordings.

Paul is pure New Orleans, and he might just be the best songwriter in the entire city. The songs on this album span his entire songwriting career -- from his days of trying to hack it as a singer-songwriter in New York, to his time with Cowboy Mouth, some covers, and some new songs as well. It's unclear to me why he returned to some of those Cowboy Mouth songs -- "Light it on Fire," "One Cigarette I Will Remember," and "Louisiana Lowdown." And although I think Fred pretty much nails "Light it on Fire" every time he sings it, the version here breathes new life into the song's instrumentation, which is certainly welcome.

Really, I think he just made it to prove that, even on a bad day, he still outclasses just about everybody as a songwriter. But that assumes that he actually has something to prove. Unlike a lot of the gentlemen featured on this blog, he doesn't. He's not trying to impress a girl, he's not shooting for world fame, and he's not trying to show off his guitar playing skills. As he would say, he's a simple man who writes simple songs. But his simple songs are so damn good.

TL,DR: Listen to "I Love You For Tonight," "Light it on Fire," and "Land of Dreams" -- which is truly breathtaking.