Pride Month: Dave End -- How to Hold Your Own Hand

Hey, you look like you could use a smile.

Not because you look down, but because we could all use a little more lightheartedness.

I think that's where Dave End is coming from in his endearing acoustic pop. 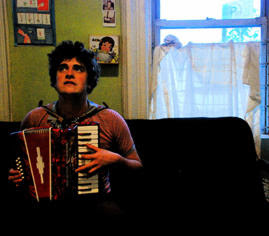 The first (and only) time I heard Dave, he performed at our college for our GSA's fledgling attempt at hosting a queer music concert. (I tried again the next year -- it crashed and burned miserably.) It seems as if he's virtually disappeared from the Internet since then.

Wherever he is, I hope he's OK. His songs blend a courageous optimism with wide-eyed innocence and boundless optimism. I never listen to this album without finding something new -- clever wordplay, a new layer to his seemingly simplistic pop.

The songs are (in my opinion) the truest example of what it's like to be an awkward baby gay on a college campus in the 2000s. They got me through that stage, at least.

He seems to have joined a drag group called Gender Fabulous!, but they seem to be no longer active. If anyone out there has any information about Dave, let me know.

And By Queen...
Someday
The day gives up