I'm excited to announce the very first of what I hope will be more interviews here on Adobe and Teardrops! Hannah Aldridge is a singularly gifted singer-songwriter from Muscle Shoals, Alabama. Her father, Walt Aldridge, is a "Music Achiever" in the Alabama Music Hall of Fame, which means he will be inducted at some point in the future.

Hannah has clearly inherited his chops, infusing her ethereal folk with a plaintive tone that can only come from experience. Hannah was kind enough to sit down for an e-mail interview. She wants you to listen to her music, and so do I. 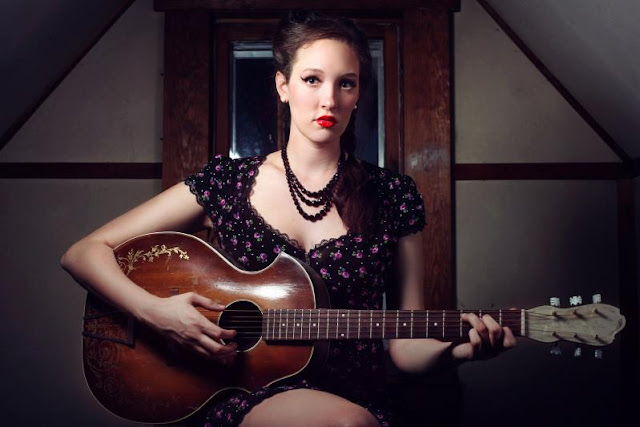 So you write you're a working singer-songwriter, a ballet dancer, and a mom. When do you sleep, exactly?

Haha. Well sleep is really a luxury for me. To make it more insane I also own an entertainment company and up until this semester I was in college too. I have had to make some hard decisions and sometime I just force myself to turn my phone off and put everything away to have a day to myself. At the end of the day nothing is as important as my son and my quality of life. I have to be careful not to work myself into an early grave.

In another interview, you talked about the moment when you had to choose between dancing and music. What drew you to music?

First of all, the are far fewer injuries in music. I got tired of being on crutches and having broken bones! It took a lot of faith for me to lay down my pointe shoes, abandon 4 years of college, and dedicate myself to music 100% without looking back, but at the end of the day I truly believe that this is what I am supposed to be doing. It's not an easy career by any stretch of the imagination, but I think that I am supposed to be a voice. I'm still trying to figure out what exactly it is that the man upstairs wants me to say though, but when I step onto the stage there is a voice in my head telling me "This isn't about you. This is about something much bigger than yourself"

You recently released a six-song album, Wanderer, and have another two short albums in the works. You've said elsewhere that you want each of them to redefine folk music. What makes Wanderer different, and where are the other two albums headed?

Wanderer was a very experimental album. I am influenced by everything from The Mars Volta and Nine Inch Nails to Gillian Welch and Patty Griffin, so "Wanderer" in hindsight is really a hodgepodge of influences in album form while I was trying to find what genre worked best for me. My next album, which will be a full length album, is a totally different side of me. The past year I have been surrounded by a wonderful team of people who have been fearless enough to tell me that stuff sucks and have really pushed me to be better at everything. My writing and guitar playing have come lightyears beyond what it was on Wanderer and my voice has really begun to settle for the time being into a country sound. I am from Alabama and I am recording in my hometown of Muscle Shoals so this next album is really all about me getting back to my roots. Nothing on this album is forced. It is meant to capture an very organic sound and we all are feeding off of the cool vibes from Muscle Shoals to give it that " Muscle Shoals Sound". As for the third album… we will see where the next year leads me!

I'm 23 and you're not much older than me. Why do you think Americana has become more popular with people our age?

I would like to believe that it is because it is a revolt against contrived crap that is force fed to us on the radio. I think people have forgotten what real drums and real voices sound like. We have been so overexposed to these pre-packaged " #1 hits" that when there is anything that has any glimpse of truth or rawness to it, it is like a fresh breath of air. Americana and folk music really is lyrically driven and is meant to make people think, which is the total opposite of most of the stuff out there on the radio, so I think that naturally people are being drawn towards it.

Do you have a favorite tour story?

This is a great question. Every tour I go on I leave thinking, "I just hope we make it home", because touring is always extremely adventurous, especially when you are touring overseas. There is a documentary that my tour manager and I filmed called "Rails to Ride" floating around out there. It is full of some hilarious moments on tour. I think by far the craziest tour story I have is the last Europe tour I left on in May ended with me being detained for something like 10 hours in the London airport and being flown home, forcing us to cancel two weeks of a tour. At some point, I was standing at the window of the holding cell in the London airport at 3 AM and looking at the overnight guards singing, "This Land Is Your Land," through the glass repeatedly just to see how far I could push them. I figured the best solution to the problem was to make them regret they ever met me. Haha. Another time, somewhere in between Prague and Amsterdam, my tour manager hit a snowy patch on the interstate resulting in two 360's in opposite directions. We ended actually facing the right direction on the road and managed not to hit anything but we were all so quiet all the way to Amsterdam you could hear a pin drop. My parents still don't know about that story, actually.

Born to Be Broken

Here's hoping Hannah's parents don't read this blog! I know something even a tenth that scary would put me off touring forever. Let's hope for safe travels as Hannah continues to spread her distinctive voice.