The Sparklers -- Crying at the Low Bar

I really wish I could say that The Sparklers from New York, because then I could say there's a local band here that I genuinely adore. But they're from the next best city (ie, Philadelphia) and I still adore them. 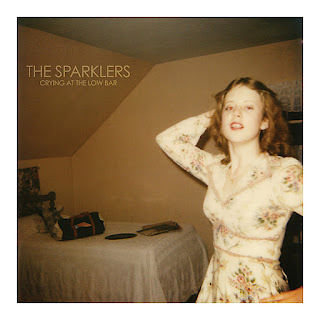 Their website describes Crying at the Low Bar as a song cycle about "loss, losing, and losering" in Philadelphia. Like a boozy, regretful night, the songs fade into each other seamlessly. While some moments are more distinct than others, the songs coalesce to create a nostalgic, bittersweet atmosphere.

Sonically, it's like they took all of the music I love and put it in a blender. And that's why, with just one album under their belts, I'm labeling The Sparklers as part of The Basics. It's been a while since I've fallen this in love with a band. Which leads me to my...

Over at Ninebullets, we were trying to figure out which early 90s rock band they sound like. While there are obvious Gin Blossoms and Lemonheads overtones, I feel like there's somebody out there who's a closer match. So, submit your guess in the comments section below with your e-mail address. On Friday I'll randomly pick a comment. I will buy a download link for the winner and send it their way. (One guess per person, please!)

Anyway, here's the part of the entry you really care about:


The Sparklers -- Official, Facebook, CDBaby, Bandcamp, Spotify
Posted by Rachel Cholst at 12:00 AM

Email ThisBlogThis!Share to TwitterShare to FacebookShare to Pinterest
Labels: the basics, The Gin Blossoms, The Lemonheads, The Sparklers