The Sometimes Boys -- Fire and Ice

I hesitate to use the word "experimental" when it comes to music. To me, "experimental" means a bunch of people noodling around on their instruments while ignoring silly concepts of Western music like "melody" and "keys." I guess it's because schmucks like me have thrown the term around when we can't figure out what else to call something. But really, it should apply to artists or bands who take risks. The Sometimes Boys are an experimental folk band who deserve to win the Nobel Prize in Chemistry. 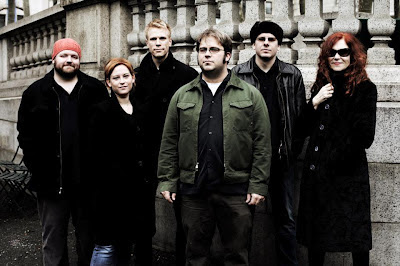 The Sometimes Boys' music is a Frankenstein's monster of folk, bluegrass, jazz, and what I can really only describe as showtune-style narratives. But this is not a monster that will want to make you run away in fear and terror (and I harbor almost-complete antipathy towards showtunes.)

The album seems to be a meditation on the cyclical nature of the seasons and life. To me, the thematic cohesiveness of the album elevates this ambitious music to a true artistry that isn't usually found among singers -- folk or otherwise. Every note on this album is intentional. Even if you're more fond of some of those notes than others, there's no faulting The Sometimes Boys for mediocrity.

This is one of the more adventurous albums I've heard all year.

Email ThisBlogThis!Share to TwitterShare to FacebookShare to Pinterest
Labels: The Sometimes Boys