Perfection is listening to Rosary Beard's Halfmoon Fever while reading about the history of colonial New York before dropping off to sleep, knowing it's the last night I'll be able to stay up past midnight with a clear conscience until June. (Only one of those things is dorky.) That's right -- this entry marks a shift in how I will select music for this blog: not only will it appear on here if it makes me sit up straight and pay attention, it'll be on here because I had to stop my furious lesson planning and listen to it. If my update schedule becomes less stable from hereon out, it's because I prioritize my kids' education more than promoting your music. Sorry, artists. It's nothing personal.

Either way, this Saratoga, New York duo would have made it here. 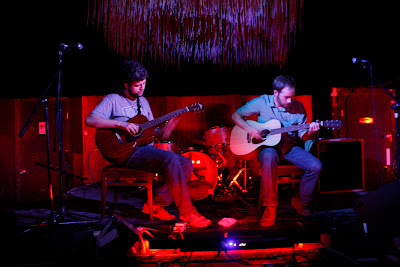 There's a reason I chose Halfmoon Fever as the soundtrack for my scintillating late-night read. For one thing, Henry Hudson's boat was called de Halve Maen (Half Moon) doncha know. Secondly, the acoustic guitar duets call the Hudson Valley to mind. Consciously or not, Rosary Beard have sonically captured my childhood memories of my grandparents' house -- the golden late summer afternoons, clouds scudding across the moon on a December night, the gentle dips of the Catskills.

Normally I dislike modern instrumental music since it tends to be more focused on a masturbatory display of technical skill than a sense of musicality. Rosary Beard's compositions, by contrast, are short, restrained, and melodic. These songs have elements of familiar roots and folk music that will catch the ear, then flutter away to extended explorations of the theme, always to return to the initial, comfortable, hook. The two guitars are in dialogue, and their conversations are worth paying attention to.

I know I've said this before, but if I had any skill at creating music, this is the music I'd write. That may sound narcissistic, but hear me out: if music is a form of self-expression, and we use self-expression to connect to others, then it makes sense that the music that effects me the most matches the music I create for myself in my head. And that's why it's going on The Basics list -- because it made me care about instrumental music, and because it reflects what's going on in my head.

I strongly encourage you to buy a physical copy of this album. The jacket design is stunning and I'm fairly certain that the song titles are meant to form a poem, an effect that is best appreciated when looking at the jacket.

Email ThisBlogThis!Share to TwitterShare to FacebookShare to Pinterest
Labels: Rosary Beard, the basics