The Damn Choir -- You're My Secret Called Fire

Today's my birthday. I got up at 10:30, made an epic omelet, and then watched Mobile Suit Gundam 00. This is a NO REGRETS lifestyle, you guys.

I am also on a kick of husky-voiced men with acoustic guitars. And if you're not, it's about time you were. 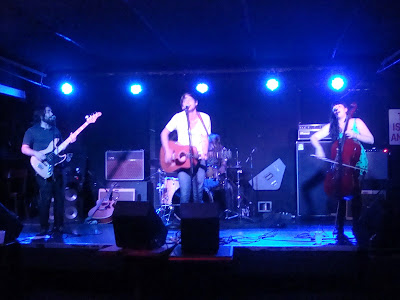 Apparently, my grown-up camera is not too impressive either.

Chicago-based The Damn Choir hits all the right notes. At first glance, they might sound like just another group of people trying to cash in on the faux Southern gothic thing. But seeing them live -- an experience that cannot be captured in this photo, alas -- showed me that these folks can put their money where their mouth is.

Gordon Robertson's weather-beaten vocals blend with Katy Myers' sweeping cello to make brutally honest, plaintive music without the melodrama. Ryan Farnham's vicious drums and Brandon Stein's pitch-perfect bass round out the now-quartet. They clearly live in their music. I found that far from affectation, Robertson's biblical lyrics bring to mind the plaintive, sweeping mythology of Bill Mallonee and his former band, The Vigilantes of Love (a band that has not received attention here, but it seems like it's about time they did.)* However, The Damn Choir has a bitter edge that Mallonee's Calvinist despair does not.

* Scroll down to Audible Sigh and Slow Dark Train for a good intro.

Email ThisBlogThis!Share to TwitterShare to FacebookShare to Pinterest
Labels: The Damn Choir, The Vigilantes of Love