Hurricane Sandy's finally starting to make her mark here in upper Manhattan. By a stroke of serendipity, the winds have set off a car alarm that just so happens to be in the same key and tempo as MONARCH's "Keith's Heartbreak." I'll be less amused, though, when the damn thing is still going off at 2 AM. 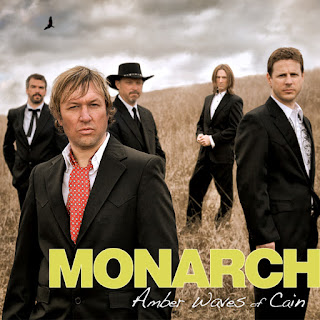 You may be saying "Rachel, this is a Halloween post. Throw up some songs about zombies." But the fact of the matter is MONARCH's studies of hard living and hard luck should be enough to send a chill down your spine. The characters featured in this album -- and it really is one coherent story, not a collection of random songs -- are familiar to all of us. We might even see ourselves in them.

The band's rootsy rock softens most of these song's edges. Floating between country and alt-rock, MONARCH would fit comfortably (to me) with the more bombastic southern rock bands of the '70s. "Stoner Ave," "Tearing Me Down," and "Coyotes in the Canyon" have the epic scope of classic rock tunes gone by.

Whatever MONARCH borrows from the past sonically, their piercing characterizations and critiques of 21st-century America belong here in the present. These are songs that will make you stop and think, a quality that artists of any decade strive for. And it's that lyrical power that will separate Amber Waves of Cain from the chaff.

Email ThisBlogThis!Share to TwitterShare to FacebookShare to Pinterest
Labels: MONARCH