I blared this album in the staff room a few weeks ago. It was the end of the school year and I had no "cares" to give anymore. One of my colleagues raised an eyebrow and I offered to turn the music down.

It's OK. He's, like, 50 years old. I understand that there are frequencies that only young people (or maybe people who have seen too many bar bands) can hear.

Brothers of the Last Watch reminds me of a particularly effective scene from The X-Files. There's an episode in season 7 called "Signs and Signifiers." It compares the sermons at a creepy, snakehealer tent revival shack and a much more sedate Southern Baptist church. The snakehealer is manic, spitting verse at the top of his lungs while his congregants stomp their feet and sing gospel songs with acoustic guitars.

Brothers of the Last Watch is that sermon. 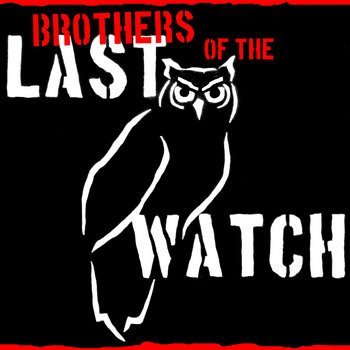 This is lurching, herky-jerky, electrifying rock. It'll make the hairs on your arms and neck stand up. And it'll leave you believing in the saving power of music.

Brothers of the Last Watch -- Official Site, Facebook, Bandcamp
Posted by Rachel Cholst at 3:00 AM