Actually, the full title of the album is MAPS (or cartography and the art of generalization) but I didn't want to break Blogger.

The title is almost as long as the EP itself, but the EP is as enjoyable as the title is ponderous. 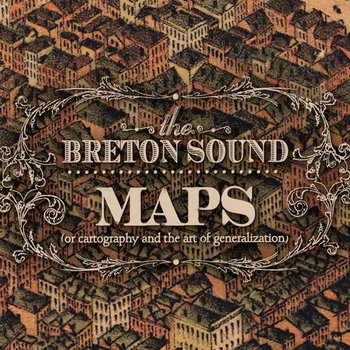 The Breton Sound is backed up by some NOLA music scene royalty. Lead singer on guitarist, Jonathan Pretus, toured with Cowboy Mouth for a little while. Their first EP was produced by Better Than Ezra drummer Tom Drummer, who returned to helm the mixer (or whatever) for MAPS.

If JP will compare the momentary comparison, The Breton Sound pulls off what Cowboy Mouth has spent the last ten years trying to create: '80s-inflected anthemic power pop that makes people feel good about themselves. JP's vocals soar with emotion, and it's clear that the band is, like, having fun playing music they feel good about.

Stephen Turner's searing guitar solos are not to be missed. It's not necessarily to my taste (I really can't stand '80s rock) but it's worth appreciating his skill. If you're into Rush, you'll love the Breton Sound. If you're not, you'll love them anyway -- you'll be carried along by the band's strong melodies and chutzpah.