Sandra Phillips -- Too Many People in One Bed

There were a couple of reasons why I curled up in a ball this afternoon and started bawling for my ex.* But one of them was definitely Sandra Phillips' misery in "If You Get Him (He Never Was Mine)." That being said, most of the tracks are downright inspiring. 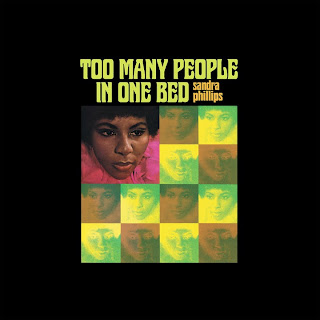 Too Many People In One Bed comes to us after 40-some years in record label limbo. The original label, Canyon, dissolved shortly before this album's release. Alive Naturalsounds has been reissuing a series of records produced by a gentleman who goes by Swamp Dogg.

But there's plenty on here for the casual soul listener like myself. You'll recognize the opener, "Rescue Song," and "Someday We'll Be Together." Phillips' voice may lack the depth of the singers who did ultimately popularize these songs, but she makes up for it in...errr...energy (you know exactly what I was going to say.) But that's all in the past -- Phillips has gone on to become a successful actress on the stage and screen.

For a much more knowledgeable review, check out this loving guest post on Popa's Tunes.

*Note: I write these entries several days before publishing them, so this didn't happen at work. Thankfully.
Posted by Rachel Cholst at 3:00 AM