Josh Erwin and Michael Paynter, the fine gentlemen of Sans Abri, took a break from writing brilliant songs to answer a few of my queries. 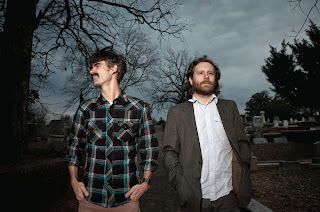 The music of Sans Abri is clearly very different from the bluegrass you guys normally write. Where did these songs come from?

Josh: The songs from Sans started as individual songs of mine and Michael's.  They just started popping up and naturally came out while trying to not let specific genre/form dictate any direction of where the music should go.  After they were completed it became pretty clear that they did not have a home in the Packway Handle Band repertoire, but both Michael & I thought they were still great songs, so we created an outlet to perform them.

I think what's most distinctive about Shelter is the way the two of you complement each other so well. What is your writing process like?

Josh: Writing the music and lyrics start individually.  The bones of a song are written by either Michael or myself-- lyrics, chord progressions, verses/choruses.  We get together and introduce the structure, go through playing the verses and the choruses.  When we're at the point of understanding how the parts fit together, ornaments begin to develop.  Ornaments may be what rhythm fits best over the song, where harmonies should be placed, if parts should be repeated/shortened, intro or outro ideas, etc.  It usually takes playing these songs for about a month or so before they are completely developed.

To piggyback off the previous question, how did the two of you begin to write songs? (Either individually or together.)

Josh: I began writing songs when I was a teenager.  After I had a basic understanding of the guitar, I liked forming my own guitar licks and chord progressions.  It was only about the music portion of songs for me until I was in my mid 20s.  Never considered lyrics or thought I could write words for my own music until then.  It's definitely something I enjoy-- putting my own lyrics to my own music. Alot of strategy and crafting.

Michael: I also started writing songs in my teenage years.  I had been writing poetry, bad poetry to be sure, in years previous and when I realized I could add music to my words I knew it was what I wanted to do.

What's the inspiration behind "Winds Me Up"? I find it to be the most emotionally touching song on the album.

Michael: "Winds Me Up" is about being away from the one person who understands you.  I experienced a lot of mental problems in my late teens and early twenties, namely panic and anxiety, and not being able to talk that someone who understood me left me feeling alienated and alone.  It was like not being able to touch ground and recenter myself.

Sans Abri -- Bandcamp
Posted by Rachel Cholst at 3:00 AM