Canadian singer Pat LePoidevin's project transcends the bounds of mere music. Literally. American Fiction is actually a multimedia project: the album is accompanied by a book of short stories written by his childhood friend Lewis Smith. Each song (and, I guess, story) are named after a small town in the States. Neither men are American, nor have they lived in America. The project was an exercise in storytelling, and boy is it a success. 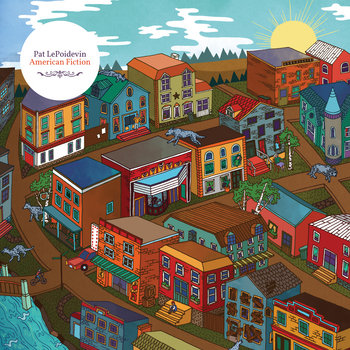 I have no had a chance to read the book, but it would be interesting to contrast the two. LePoidevin's lyrics surely have a literary quality. Each song tells the story of lovers, losers, and dreamers in small towns across the US. The economic decay and traditions of these imagined communities form the backdrop of perfectly ordinary people. LePoidevin's artistic lens gives these stories an epic scope.

It's funny to think of the America as an exotic place, especially given how culturally similar we are to our Northern friends. For one thing, many of LePoidevin's songs use baseball as a motif. Unfortunately, we're a nation of barbarians who would rather watch grown men concuss themselves instead of gentlemen who follow an arcane set of etiquette and do everything they can to hide the fact that they're totally cheating. What's more American than that?

Email ThisBlogThis!Share to TwitterShare to FacebookShare to Pinterest
Labels: Pat LePoidevin, the basics