prattle on, rick. -- Some Quiet Majesty

In case you missed it, the Vulture recently published an article about the similarities between hipster folk bands like Mumford & Sons and the folk movement of the '60s. If you idolize Bob Dylan, you should make sure you take your blood pressure medication before you read it.

But the TL;DR is the idea that most of the people performing this type of music -- then and now -- is that they're not actually that authentic. They're not poor, they're not hobos, and they may not have really been oppressed all that much.

But Nitsuh Abebe gets it right on the nail when he explains what folk is all about:

"...the claims in favor of folk are always, across the years, that it is somehow right. That it has more depth and spirituality, more connection to history and the people, more political consciousness."

prattle on, rick. shows us that side of folk music -- the good, the pure, the right. 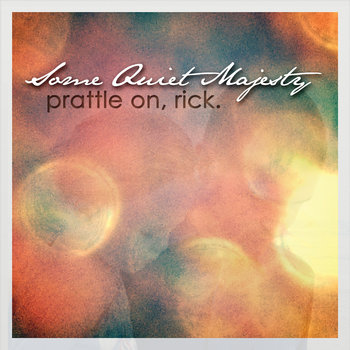 In the hands of a less capable artist, Some Quiet Majesty would be a grandiose and presumptuous title for an album. But Patrick Rickelton's meditations on fatherhood and spirituality truly are majestic. These songs are honest, sure, but there's lots of honest songwriters out there. There's a subtlety to Rickelton's craft that gives Some Quiet Majesty a unique depth. More importantly, it speaks of even greater things to come.

prattle on, rick. -- Official, Facebook, Spotify, Bandcamp
Posted by Rachel Cholst at 3:00 AM