It's impossible to deny the charm oozing out of Eric Peter Schwartz's songs.

But sometimes it's a little too easy to capture my heart. The opening bars of "Tangerine," the Troubadork's lead track, start off like your average folk song. The first line does, too:

He liked the way she rolled the dice

OK, so maybe it's some kind of cowboy love song, even if the guy's voice doesn't really match it.

And the way her character
Always gave his character eyes

He was a third level thief

The song has a happy ending, of course. Nerd love. <3 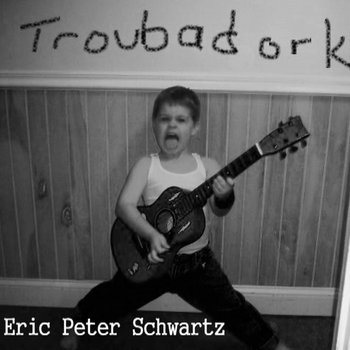 But that's the kind of guy Eric Peter Schwartz is -- or at least, the guy he seems to be according to these songs, which are so earnest and plainspoken I doubt there's much separation between his stage persona and true self. The songs seem simple on the surface, but they'll catch you by surprise. They're worth a close second or third lesson for sure. And, if all of these songs about sexy times are to be believed, the big takeaway here is that the geek truly shall inherit the earth.