I sat on Late Risers for a while. Too long, really.

As a listener, I enjoy digging into an artists lyrics, thinking about what the song means, imagining what inspired it. But in The Abramson Singers' latest album, the lyrics take a back seat. 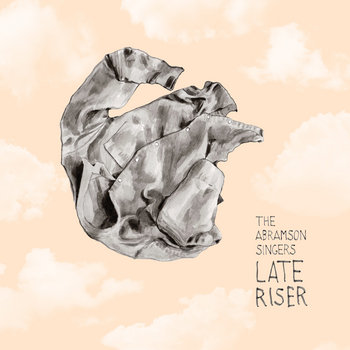 The Vancouver-based band is led by Leah Abramson, who has a voice for the ages. She reminds me of a hybrid of Kathleen Edwards and Dolores O'Riordan of the Cranberries. (Whatever you think of their music, none of us can deny the fact that she's a vocal powerhouse.) Abramson's lyrics slip over and under us, mostly because we're captivated by her voice. The rest of the band's performances are gorgeous and tight-knit, but they know better than to outshine Abramson.

While grounded in folk, Late Riser is very much influenced by the indie rock of the early 2000s. Some instrumental interludes, like the opener, may be off-putting to those of you here for the folk. The first 45 seconds of the album certainly made me skeptical. But "Liftoff Canon," a haunting, a capella round, grabbed my attention and set me gently down at the end of the final track. Ultimately, this album is all about atmosphere: sad, longing, and wistful.

The Abramson Singers -- Official, Facebook, Bandcamp
Posted by Rachel Cholst at 3:00 AM

Email ThisBlogThis!Share to TwitterShare to FacebookShare to Pinterest
Labels: The Abramson Singers