There are so many reasons to say "WTF?" to yourself when you ask strangers to email stuff to you. But the press release for LIVINGSTON's debut album is truly incomprehensible. Here it is in its entirety.

Featuring work produced by the sentient database LIVINGSTON, Artificially Intelligent Folk Songs of Canada, Vol. 1 is the culmination of years of research in both Canadian folklore and computer science. What if we had a digital machine that could access the entirety of Canadian folk music and generate new yet hyper-authentic compositions from the source data? Thanks to this exciting collaboration between Canadian song collector Dr. Henry Adam Svec (The CFL Sessions, Folk Songs of Canada Now) and Czech programmer Mirek Plíhal (Všechny Milí Lidé), there is no longer any need to wonder.

An intelligent archive is already an achievement. Yet, LIVINGSTON only produces transcriptions of words and melodies, and so our engineers also needed to put together a band. Fronted by Svec himself and featuring Misha Bower (Bruce Peninsula), Marshall Bureau (Octoberman, The Pinecones), J.J. Ipsen (Hayden, Jim Guthrie), Andrew Penner (Sunparlour Players), and more, these human musicians have breathed life into LIVINGSTON’s brilliantly cold calculations; from rough hollers and stomps to smooth-country croons, from the sparse sounds of the field to the sparkle of Andy Magoffin’s House of Miracles Studio, Artificially Intelligent Folk Songs of Canada, Vol. 1 documents the limits and possibilities of Canadian folksong—a record as wide and as varied as our land and/or the internet.
Download the music for free (or for a small contribution) via www.folksingularity.com, where you can also access tour dates and the FAQ, and stay tuned for Vol. 2 (sung by Olenka Krakus) and Vol. 3 (sung by Mathias Kom).

So is this for real? I did a little bit of research. Svec really does seem to be an honest-to-goodness folklorist. If his CV isn't some kind of elaborate performance art, he's done quite a bit of research on the relationship between folk music and digital archiving. His previous project also seems to be about compiling and preserving Canadian folk music and postconsumerism and blah blah hipster bullshit (?)

Plihal, the alleged programmer, plays some percussion on the album but I didn't otherwise find an online presence for him. 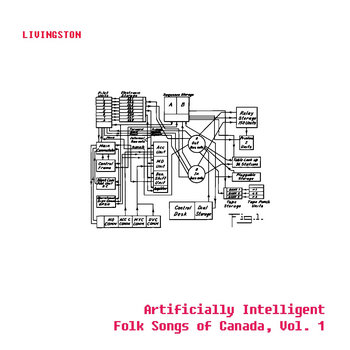 So how's the music? Computer-generated or not, there's a truly human quality that people who aren't posing as machines have a hard time creating. The title track, "I Am a Weary Immaterial Labourer in a Post-Industrial Wasteland" is immediately relatable, regardless of the seemingly pretentious title. Maybe the lyrics are a little disjointed, maybe these songs don't always make the most sense...but is that because a computer or wrote them or is it because, when you think about it, most folk music is impressionistic and a little strange? Is all of this a true distillation of folk music or is it the way we frame it because all of a sudden there might be a computer involved? Can we really believe that a computer is able to plug in a few numbers to recreate a genre that prides itself on its humanity and honesty?

The one song I have no idea what to do with is "Take It Easy but Take It To the Limit." First of all, it's a fairly straightforward cover of one of my all-time favorite songs (I know, I guess you have to stop reading this blog now). I don't hear any influences from "Take It To the Limit" at all. Furthermore, none of the Eagles are Canadian as far as I know. Is Svec saying that the song is so perfect...or inoffensive...or affable...or bland...that a computer could have written it? Or is it like monkeys with a typewriter producing Hamlet and somehow this fully formed song was reproduced?

Or whatever. This is great music regardless and I should stop with my hipster bullshit posturing.


LIVINGSTON -- Official (where you can download for free), Name your price at Bandcamp
Posted by Rachel Cholst at 6:41 PM