Run By the Gun -- Songs From the Little Blue House

Is Rey Miranda stalking me? How did he know I wouldn't be able to resist a gorgeous comic book and garage rock?

Run By the Gun is Miranda's multi-media project, a graphic novel about a struggling rock band accompanied by the fictional band's album. 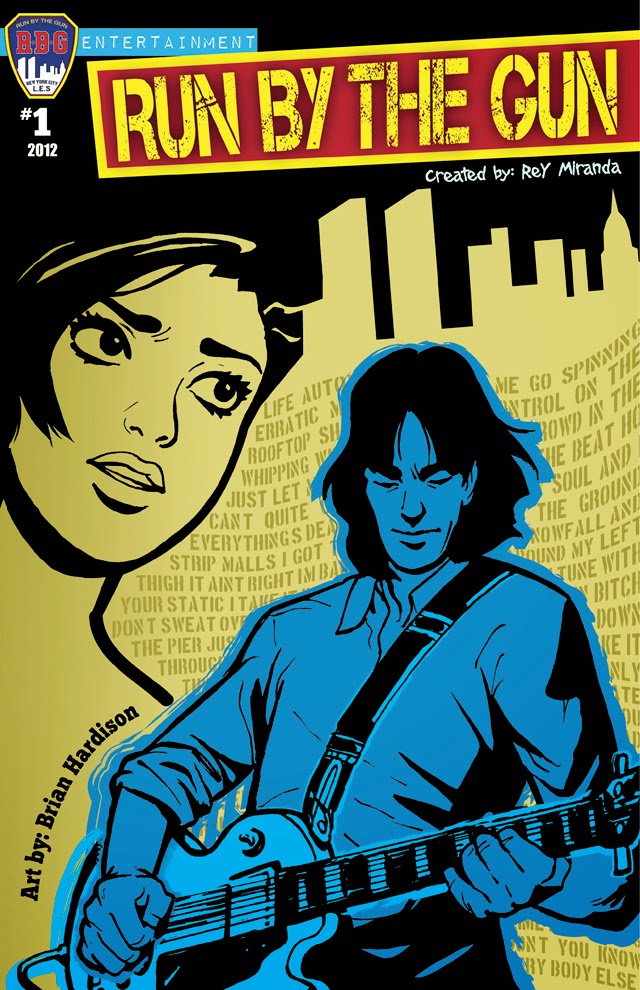 So let's start with the comic itself.  The story follows Peter Palermo, a lower-middle class manchild from Long Island struggling to make it big in New York. We begin with Peter choosing to sign a record deal or staying true to himself. Meanwhile his girlfriend, Ada, is just about ready to pop out their first kid. Can Peter get a band and his life together?

Brian Hardison's bold line work in issue 1 and Meredith McClaren's warmth give the book a cartoony feel that never strays far from realism. The style is obviously manga-inspired -- appropriate for a story with this much emotional depth -- but is rooted in the dire realities of these characters' lives. I found myself thoroughly annoyed with Peter by the end of issue 2 (hint: he does not get his life together.)

The music is just as refreshing as the art. The story is supposed to take place in late-'90s Williamsburg, when a hardcore scene still nominally existed there. I am neither old enough or cool enough to remember anything about that, but I can tell you that a band like Run By the Gun never would have made it back then. The scene kids were listening to emo and everyone else decided they liked rap. The plainspoken, heartfelt rock'n'roll of Run By the Gun would have been hopelessly lame, even if High School Rachel would have loved it. Grown Up Rachel loves it, too.

We don't know enough about the characters yet to see how all of these songs fit into the story, though, sadly, it's not tough to guess.

The Devil In My Dreams (Exclusively available for download here -- limited time!)

Run By the Gun -- Official
Posted by Rachel Cholst at 3:00 AM

Email ThisBlogThis!Share to TwitterShare to FacebookShare to Pinterest
Labels: Run by the Gun