A couple of months ago I reviewed Ed Tang's most recent EP, an exuberant push into alt-country. I mentioned that there was...something...missing. When I went back and listened to Goodbye... I realized what it was. The EP feels a lot like someone took a paint-by-numbers outline and mixed their own paints. It has it's points of originality, but the form has been studiously followed. It seems like Ed really wanted his second release to feel a certain way and may have stifled some of its own energy in the process. 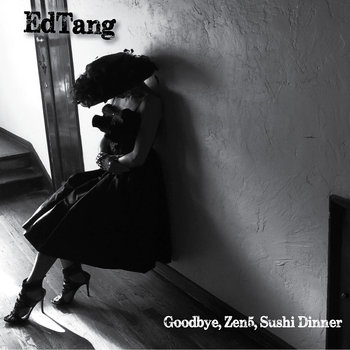 Goodbye... does not have that problem. It's about clinging to the ideals of youth. The album kicks off with the tale of a life-altering South American road trip. The album can pretty much be summarized with this line:

You can’t go back, its full speed forward to some midlife heart attack.
But the ropes of St. Christopher you placed around my neck,
Baby, they brought me back to you.

It's more effective with the music, to be sure, but it betrays a sort of cheerful nihilism -- let's have fun now before we have to go home and be boring for the rest of our lives...or at least do our best to fight it. Musically, the album has more in common with the Gaslight Anthem than Tang's country heroes, but I'll never complain about that. This is a fantastic album. You can name your price for it on Bandcamp, so there's no reason not to snag it. Here's to Tang's next release. I hope it captures the urgency in Goodbye, Zen5, Sushi Diner

Email ThisBlogThis!Share to TwitterShare to FacebookShare to Pinterest
Labels: EdTang and the Chops, free music, the basics