What the hell is going on upstate New York? Earlier today you read about The Lucky Jukebox Brigade, who are based in Albany. By pure coincidence, Great Mutations (a very different type of band) is based in Troy, NY. I'm not sure if it's a byproduct of the Internet Age -- in which artists don't really need to move to cities like New York to produce and distribute their work -- or a byproduct of gentrification in NYC compelling artists to move to/stay in the Hudson Valley. (Either way, hipsters have discovered upstate New York, so get ready for rural gentrification. I say this with a chill in my spine.) 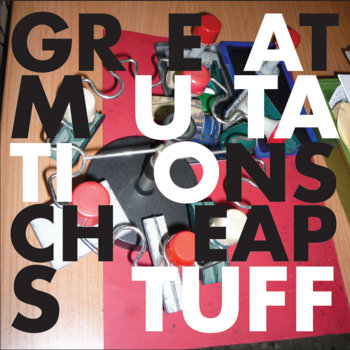 But enough of my philosophizing. Let's talk about Great Mutations'. This is a dreamy album about how, well, life just kind of sucks sometimes. Mostly it's about the soul-killing nature of the 9 - 5 grind. I think listening to this album while speeding through Japan on a bullet train in the middle of my paid 8-week vacation was probably not the best venue for listening to the album. Either way, it made me appreciate all the more my steadfast refusal to work a desk job.

The droning, fuzz rock is interspersed with what I hope are fake voicemails about a corporate project (because it sounds completely inane), juxtaposed with lyrics about the futility of producing music nobody's ever going to listen to. The album sounds like a bit of a downer, sure, but I think it's a testament to the human spirit and fighting against the forces that keep you down. Plus, it sounds great.