I don't think it's quite right to say that the music scene in New Orleans has been "revived." It's not like it every went away. And it's not newly "relevant," because New Orleans is very much part of the fabric of American life. Maybe it's just better to say that the roots/rock revival has made its way to the Big Easy. If you think any band represents that vibe better than Sweet Crude, I will challenge you to a duel. 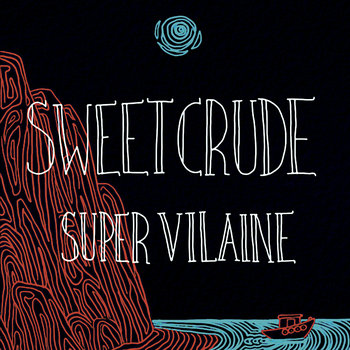 I wasn't sold right away. When I listened to the first 30 seconds of "Super Vilaine" I dismissed it as hipster bullshitting. But Paul Sanchez and Sonia Tetlow have not steered me wrong yet when it comes to music, so I thought I'd at least give them another shot.

So with way more than 30 seconds logged with this EP, I can say that Super Vilaine is truly dynamic and shines a beacon on the future of the New Orleans music tradition. If zydeco is the baby of rock'n'roll and traditional Cajun music, this is neo-zydeco. Sweet Crude is undeniably proud of their Cajun heritage -- the language and the music are strong throughout, but they're augmented by tribal and hip-hop beats, synthesizers, and an exuberant call-and-response chorus the likes of which fun. have never seen.

The band has already toured nationally (I was otherwise occupied when they came up here, which I deeply regret.) The EP itself is superbly produced, as a dance music album should be. Super Vilaine is a living example of combining tradition with the present.

Sweet Crude -- Facebook, Bandcamp
Posted by Rachel Cholst at 12:00 AM