Sorry for the radio silence, sportsfans. It took me way longer than I thought it would to get over the jetlag. But don't think I wasn't scouting out music in Japan -- you'll hear more about that in the weeks to come.

For those of you following at home, you've already seen the Lucky Jukebox Brigade's charming video for the lead single off their sophomore album, Familiar Fevers. 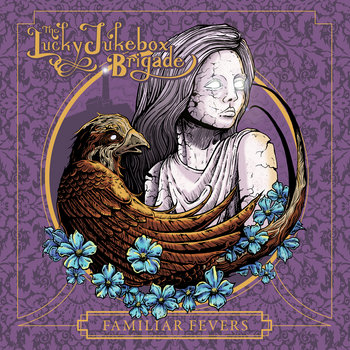 "Glamour," easily the catchiest song on the album, is about spending the day with a lover who's visited from beyond the grave. From what I can tell, Familiar Fevers is a concept album about consorting with the Devil -- or, at the least, a demonic figure. Laced with brass, the Lucky Jukebox Brigade call to mind an early jazz band with a heavy rock'n'roll influenced.

If that summary doesn't sound appealing to you, I can't really blame you. The Dresden Dolls (and now Amanda Palmer) are the first and last word in gothic old-timey jazz. Most follow-ups have been, frankly, unnecessary. But the Lucky Jukebox Brigade isn't blindly following an obscure trend. Just from watching the video I get the sense that this is simply the psychic space they live in. The lyrics to these songs are worth reading on their Bandcamp page -- they're dense, and written in paragraph form.

But that makes sense -- these songs are novelstic in scope. Indeed, they're the art songs of a bygone era. While the songs are jammed with cryptic allusionsL

But I’m walking in silhouettes, laying low - cause in the whispers, I hear the marauders riding south. Crack the sky; tear the angels down. The headless knaves are marching through the ruins of forgotten towns. ("Darling, It's the Future")

Amidst the epic imagery, however, are kernels of universal emotion:

I hope it’s golden where you are. I hope you know I’ll be here waiting. If I live to grow old, I’ll still be searching every face. ("Darling, It's the Future")

It's these moments of emotional purity that distinguish The Lucky Jukebox Brigade from, say, Murder by Death. It's not just about the story (and my one critique of this album is that I wish the story was clearer) or making A Statement. The entire album could have easily been a pretentious exercise, but the Brigade deliver these songs with an (un-ironic) wink and nod. Familiar Fevers is truly an achievement.

The Lucky Jukebox Brigade -- Official, Facebook, Bandcamp
Posted by Rachel Cholst at 9:58 AM

Email ThisBlogThis!Share to TwitterShare to FacebookShare to Pinterest
Labels: The Lucky Jukebox Brigade