After listening to the first couple of tracks on Tusk Her's debut album, I reflected on the lasting power of the male-female-guitar-drum-blues duo, that the lady's always in the back.

Then I looked at the band's picture and realized I'd fallen victim to the most sexist of notions. Yes, that is indeed a female human shredding like a hero. 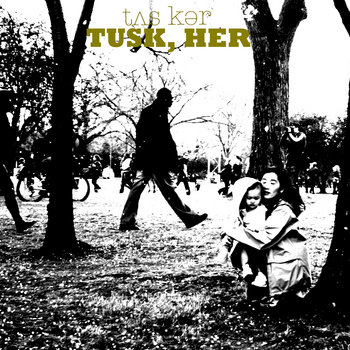 The songs here are thumping, primitive, and unsettling in the way somebody keeping pace with you down a dark street is. Sometimes the weirdness feels a little too affected, like on the nonetheless amusing "At The Bar."

However, the standout track was "Monster Love." A few days ago I played a few Kathleen Hannah songs for her edification. I mentioned to her that I don't love to sit and listen to Bikini Kill (I've always had a soft spot for Sleater-Kinney and for some reason the two are mutually exclusive in my mind,) I appreciate how important they were.

But when "Monster Love" came on my immediate, visceral reaction was "Good God, I missed this." I've been listening to too much nicey-nice or sad female folk singers, and Tusk, Her was a jolt out of that rut. I think women have a hard time in punk because it's difficult to scream or project without sounding shrill. Amanda Salazar has found her way around that with her brash vocals. It's easy to compare Tusk, Her to what you've heard before, but it'll be more difficult to appreciate those other bands once you've seen what this duo can do.

Tusk, Her -- Official, Facebook, Name your price on Bandcamp
Posted by Rachel Cholst at 12:00 AM

Email ThisBlogThis!Share to TwitterShare to FacebookShare to Pinterest
Labels: free music, Tusk Her