Cricket Tell the Weather is one of the Northeast's breakout folk bands and with good reason. The band won first place at last year's FreshGrass festival and they've won several songwriting awards.

That's all great, but let's talk about their banjo player Douglas Jay Goldstein -- mostly because he's so cute when he blushes. Doug and I went to high school together (Karen of Karen and the Sorrows also attended its hallowed halls) and sat next to each other during English. (Sounds boring but we read Lolita and Grimm's fairy tales and discussed the nature of childhood. It was a badass class.) Even in high school Doug cut class to jam with the likes of Victor Wooten. When he was around you could find him playing the theme song to Doug in the cafeteria, which I always thought was the coolest thing.

All of that is to say that I knew Doug was going places musically and I'm glad to see his devotion to his craft paying off. 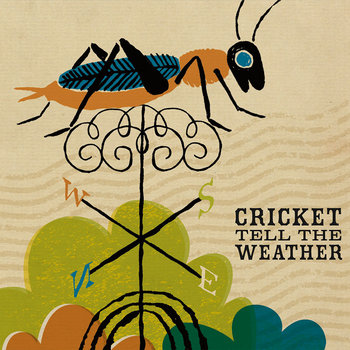 In addition to writing beautiful, moving music, the band does a lot of educational outreach to bring appreciation of bluegrass and roots music to youth. (Doug is doing this at our alma mater.) Cricket Tell the Weather is obviously dedicated to their music -- both in terms of their own songwriting and the way they spend their day jobs. I hope there's even bigger things in store for Cricket Tell the Weather because they absolutely have the chops and historical expertise to take them on.

Cricket Tell the Weather -- Official, Facebook, Bandcamp
Posted by Rachel Cholst at 12:00 AM