Superhero stories are popular because it taps into our belief that we all have a special gift, if only circumstances or discovery could show us what it is and how to use it.

I don't think that was a difficult struggle for Sean Rowe. His singing voice should be impossible, but here he is, sharing it with us. But it's not just that Rowe sounds great -- his songs are carefully crafted and quietly powerful. Rowe catches us by the ear with the lead track, "Madman," but ends his sophomore album with a slow, graceful descent with his meditations on fatherhood and mortality. 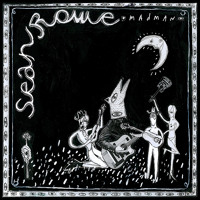 While the album's production can feel a little glossy at times, this is honest music. Rowe probably fits most handily into the category of folk, but it's clear that he draws from a rich tapestry of country, hip hop, and world music. In my opinion, it's this casual melange that feels like the next direction for American folk -- as a culture, we have to stop ignoring and start celebrating the non-Anglo-Saxon traditions in our midst. This inclusion never feels obvious or strained on Rowe's part -- it just simply is. Whatever Rowe's talents as a performer, it's his skills as a writer and arranger that's the true gift.

Email ThisBlogThis!Share to TwitterShare to FacebookShare to Pinterest
Labels: Sean Rowe, the basics