In case you missed it, I made a compilation album with Russian Winter Records. I'm not the only music nerd to receive this honor. Alternative rock radio host Chris Atwood also took a shot at it. 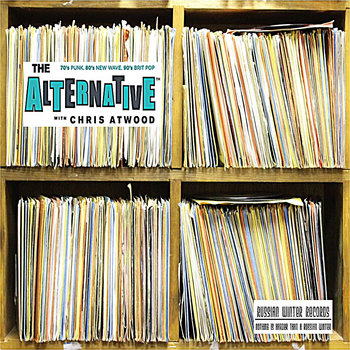 So I'll be honest...I'm not really sure how to approach this: do I talk about the music or the flow of the album? Well, I'll start with the music. A close reader of this blog will not be surprised to hear that the music was pretty hit-or-miss for me. I'm just not a fan of most 80s music. But there are some great songs on here -- "Deena Met the Devil" by Ruby Rae is a fun punk number. The New Frustrations' Bob Mould-influenced "Biggest Lie" kept me plenty of company while I was setting up my classroom. Like me, Chris chose to feature Russian Winter artist The Feel Bad Hit of the Winter (whose album I reviewed not so long ago.)

The album itself is a solid playlist, displaying the range of alternative 80s music. Starting with rock and sliding into punk, I personally enjoy the first half of the album best. When we get into electronic territory ("Workforce" and "A Fifth Column") a hit the skip button.

Long story short, there are some great new discoveries for me on here. If you like most of the songs, definitely get the album so the artists and Chris can get their due for putting the album together.

(PS -- I'm donating my cut of my comp album to an LGBTQ youth activist organization called FIERCE. You should buy my album and then go buy Chris's.)
Posted by Rachel Cholst at 12:00 AM

Email ThisBlogThis!Share to TwitterShare to FacebookShare to Pinterest
Labels: mix tape, The Alternate With Chris Atwood, The Feel Bad Hit of the Winter