Langhorne Slim -- The Way We Move

A curious think happened on Monday night. A friend of mine went out for karaoke (this is what teachers do when they have Tuesdays off) and -- among other late '90s early Aughts nu-metal/screamo/rock bands -- re-discovered Our Lady Peace. If you have no idea who I'm talking about, you'd be forgiven. They were part of alt-rock's last Top 40 gasp, riding on the coattails of their Canadian compatriots Nickelback. I never cared about the band at all, but for a while I was completely obsessed with their breakout album Gravity.

When I got home I realized that I still had it, and though it would be a great idea to listen to it. Even though I hadn't thought about the band in years, I realized that the album itself was etched indelibly in my brain -- I still remembered most of it by heart. For better or worse, all of the adolescent angst of the time came rushing back, as well as feeling comforted by the music again. The music itself is thoroughly mediocre (though a whole lot better than Nickelback.) It makes me wonder if I'll look back on this stuff in 10 years and feel the same way.

But some albums have true staying power, and that's the case for Langhorne Slim's The Way We Move. I'd post the album cover, but I want to show off this picture I took at Campfire back in August. 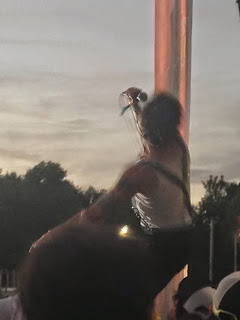 I'm super proud of it and I think it encapsulates why you need to listen to The Way We Move if you haven't gotten around to it yet. (The band recorded their latest album literally the day after this concert, so that should be coming down the pipe soon.) I don't really get people who say they "like music" but don't have any preferences. Lots of music is about entertainment, but sometimes it's for sustenance.

The Way We Move is the latter -- and so is any Langhorne Slim set you should happen to go to. You'll dance to "The Way We Move," croon along with "On the Attack," and cry into your cups during "Song For Sid." Trust me...I did all three. In a 30-minute timespan.

And thus I've written this review some few years since the album was released. It's got real staying power. It'll get you through the good times and the tough times. It's essential and it's worth reiterating that until you and all of your friends know the gospel truth.