John Mellencamp is probably the person you should blame for this blog. My car rides were awash with folk singers like Peter, Paul, and Mary, James Dean, Raffi, and early rock'n'roll like the Beatles and the Beach Boys (also weird instrumental stuff like Kenny G and Tubular Bells?????) In other words, it was never that finely curated. I'll never forget the moment I heard "Jack and Diane" on the radio. And here we are today. 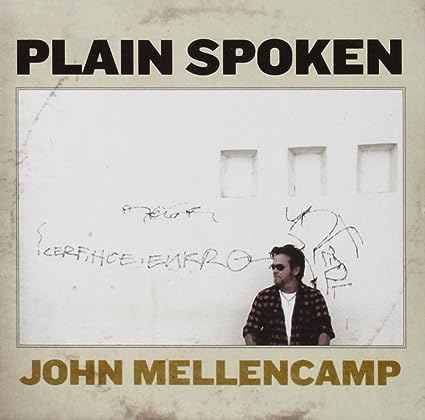 I can't tell you what it was about that sun-drenched, distorted G chord that tugged at my heart. It took me at least two decades to realize that it isn't even a happy song. Mellencamp himself as come along way from his spitfire, shit-talking ("Crumblin' Down") swaggering Midwest response (as the record companies would have had it) to Bruce Springsteen. Following in the line of his previous few albums, Mellencamp has taken up the mantle from Johnny Cash and brings us cautionary tales of humility and an old man's regrets.

Love, Death, Life and Freedom and No Better Than This both introduced me to T Bone Burnett and left me feeling cold. While Burnett has worked with a number of artists that I love, and he's picked some amazing songs for Nashville, I just can't really stand his aesthetic. Because of there's one thing I loved about Mellencamp's early work, it was his perpetual sneer combined with a fundamental warmth and joy. Burnett stripped that out of Mellencamp's work.

Plain Spoken is a refreshing change. When I heard the first, mellow note from the bass and the friendly pitter-patter of the percussion kit I was relieved that Mellencamp had ditched Burnett and brought in a band. But the whole thing was still off -- Mellencamp's singing somber ballads with an old-school plinky guitar and the fucking drums just won't stop, making it into some kind of '80s pop cha-cha. And then it turns out Burnett was at the helm anyway.

Whatever the two men get out of working with each other, Burnett just doesn't really get Mellencamp's voice. Each song on Plain Spoken is a gem polished too smooth by the production values. Yes, the sound on the last two albums was probably too spare, but that doesn't mean you should turn a 180. Too many cooks turned this album from something awe-inspiring to something that's just better-than-good. Still, check it out.

EDIT 4/4/17 -- Did you know that John Mellencamp is also a visual artist? Check it out his gorgeous work on Artsy
Posted by Rachel Cholst at 12:00 AM