Andy and the Pandy's -- It Only Gets Darker

Did you need to listen to some emotionally frustrated, introspective, twangy punk?

That's why you're here.

That's why this blog is here. So you can find out about bands like Andy and the Pandy's. 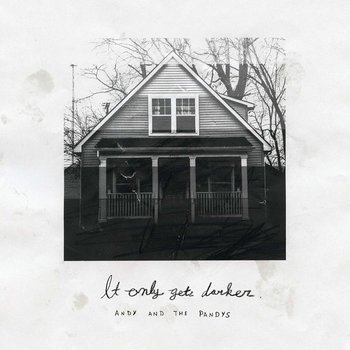 Andy and the Pandy's get down to business right away with their opening track, "Die Alone," declaring

Country songs deal with depression with resignation. Punk deals with it through anger. Andy and the Pandy's waffle between the two, which is just how I like my music. The album does indeed get darker -- we go from fast-paced songs about living fast and wondering what's next to the elegantly introspective "Fate."

Although Andy gets close, these songs never wallow in self-pity. That can make it a difficult album to listen to at times, but maybe that's because it's too close to the emotions we try to avoid. There aren't too many moments of triumph on here, but there's a whole lot of defiance. Sometimes that's more important.

Andy and the Pandys -- Facebook, name your price at Bandcamp
Posted by Rachel Cholst at 12:00 AM

Email ThisBlogThis!Share to TwitterShare to FacebookShare to Pinterest
Labels: Andy and the Pandy's, free music