Speaker of the Dead -- The Ballad of the Undercrust

God damn it. I'm in love with Gregory McKillop. But I already told you that. Speaker of the Dead was Greg's punk rock brass band. Don't worry, it works. The backing band gives a sense of monumental urgency to the album's crushing opener, "Sounds Like a Protest." While I'm not necessarily a scene kid, the song's enough to make my blood boil and want to kick down some shit. I mean, make some signs for a peaceful rally. 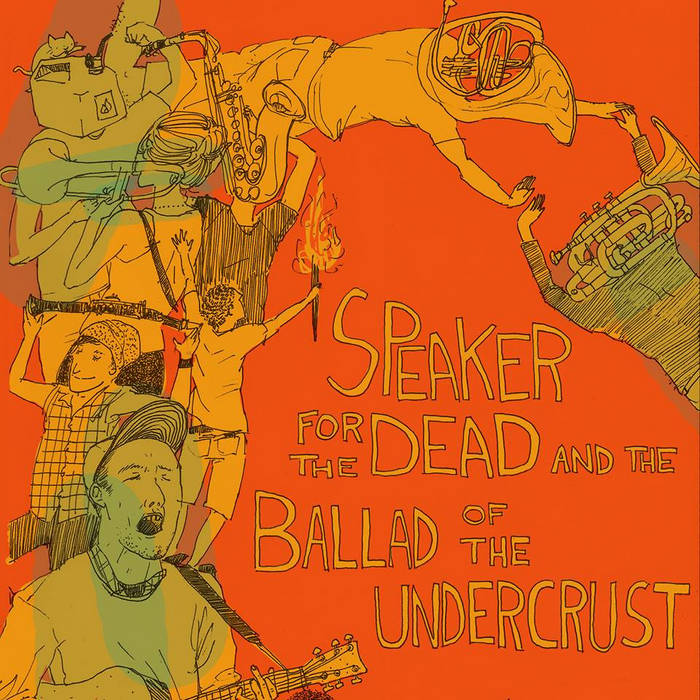 Overall, Ballad of the Undercrust is a fun album. Just skirting this side of ska (because, well, the songs are actually about something) and jazz, Speaker for the Dead lurches between gentle self-mockery ("Punk Rock Did Not Save My Life") to parables about self-pity ("And the Ghost Said! (don't say ableist things!)") and sobering reflections ("Always Ask Consent Before (Anything)...and the wyrm imperceptibly nods."). Through it all, McKillop throws his body, heart, and soul into these performances, calling to mind opera or (sorry to call to mind a certain stereotype) musical theater. The backing band throws themselves into the music with wild abandon. These guys' concerts must have been something to see. For posterity, though, we've got this album, which you can download for whatever you want. But honor the DIY scene and throw a few Washingtongs (or Benjamins -- it must be a bitch to split $5 among twenty people) their way.

Speaker of the Dead -- Tumblr, Facebook, Bandcamp
Posted by Rachel Cholst at 12:00 AM

Email ThisBlogThis!Share to TwitterShare to FacebookShare to Pinterest
Labels: free music, Gregory McKillop, Speaker of the Dead, the basics