This may sound like an overstatement, but Chuck Hawthorne's debut album, Silver Line, sounds to my brain like the platonic ideal of country music. This wasn't a conscious decision. As I did the tourist thing in Nashville and stood on the stage at the Grand Ole Oprey (where up-and-coming country stars are minted), the Ryman Auditorium (where all of the stars in the golden age of country were minted), and Winner's Bar for Whiskey Jam (where bro country singers are a dime a dozen), in a town that purports to value humility and authenticity, the music that consistently ran through my head was the chorus to Hawthorne's "Welding Son of a Gun." 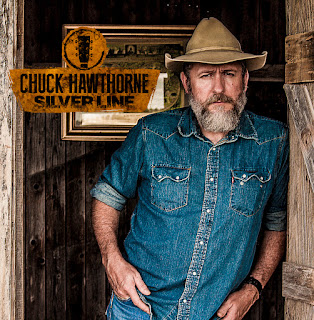 Chuck has lived every inch of the lives he's written about. An honest-to-God cowboy, a retired Marine Corps member who served in Iraq, and a working musician, Hawthorne's learned a thing or two about hard living, and damn if he can't cut you with his words. Silver Line has guitars. It has love songs. It features Hawthorne's weathered voice. From beginning to end, its songs brim with sadness, humor, regret, warmth -- life, in other words. Hawthorne deserves to walk across each stage I described (except for Winner's. Yikes.) This is the thing we're all searching for.

Chuck Hawthorne -- Official, Purchase
Posted by Rachel Cholst at 12:00 AM