Have Gun Will Travel -- Science From an Easy Chair

So far I've seen a lot of surprise that Have Gun, Will Travel decided to do a concept album. While the subject -- Shackleton's Imperial Trans-Atlantic Mission -- is esoteric, I'm not surprised. The one song that still sticks with me from their previous release, Fiction, Fact or Folktale?, is "The Show Must Go On" about a failed actor who flies into a murderous rage. Matt Burke's flair for juxtaposing the epic with the seeming simplicity of a folk song makes Science From an Easy Chair the logical move. 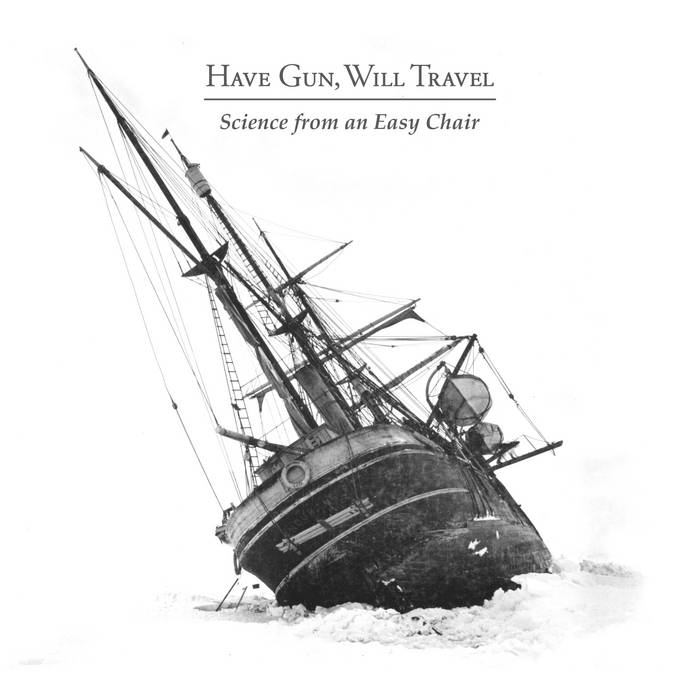 But I misspoke earlier when I said the album was about the Shackleton voyage. Sure, it's about leaving on the voyage, getting marooned in pack ice, wondering if you'll ever be rescued, and relief when you are, but that's not what this album or the songs are about.

A competent history teacher will teach you the facts of what happened. A good history teacher will help you understand the event's meaning in its greater context (as the opening track tells us, the voyage was launched just as World War I broke out -- so I guess this was missions was supposed to be British propaganda?) But a great history teacher will help you understand the greater lessons we can learn: the human drive for curiosity and glory, the interminable boredom of the voyage (the album is named for a book read aloud to the crew while they were stuck on the ice), fear, and the sense of accomplishment at meeting the most daring challenge there is, even if the mission itself never met its objective. (Modesty does not permit to say what kind of history teacher I am, though I know which one I'd like to be.) HGWT can take over my class any day.

I chose not to read about the voyage until after I had listened to the album a few times -- I wanted to hear the story through Burke first. So I can say that you don't need to know about what happened to enjoy the album. You don't even have to know that this is a concept album to enjoy it (though the instrumental interludes might seem strange otherwise.) Just as "True Believers" is about the drive to continue in the face of good sense, Science From an Easy Chair is about more than a century-old media spectacle (albeit a fascinating one.) That being said, I've added books about Shackleton to my list. Who says rock'n'roll rots your brain?

Have Gun, Will Travel -- Official, Facebook, Purchase from This Is American Music
Posted by Rachel Cholst at 12:00 AM

Email ThisBlogThis!Share to TwitterShare to FacebookShare to Pinterest
Labels: cheap music, Have Gun Will Travel, the basics