If there's one band I'd pick to listen to during the apocalypse, it'd be The End Men. Their bass and drumlines are nothing less than earth-shattering, a fitting soundtrack to the destruction of the Gomorrah I've chosen to surround myself with. Matthew Hendershot's subterranean vocals -- equal parts Tom Waits and snake preacher -- will put the fear of God into me even before the angels descend among us. The band's urgency and off-kilter blues riffs will make the other unrepentants sit up, listen, and wail when they've learned their time has come. 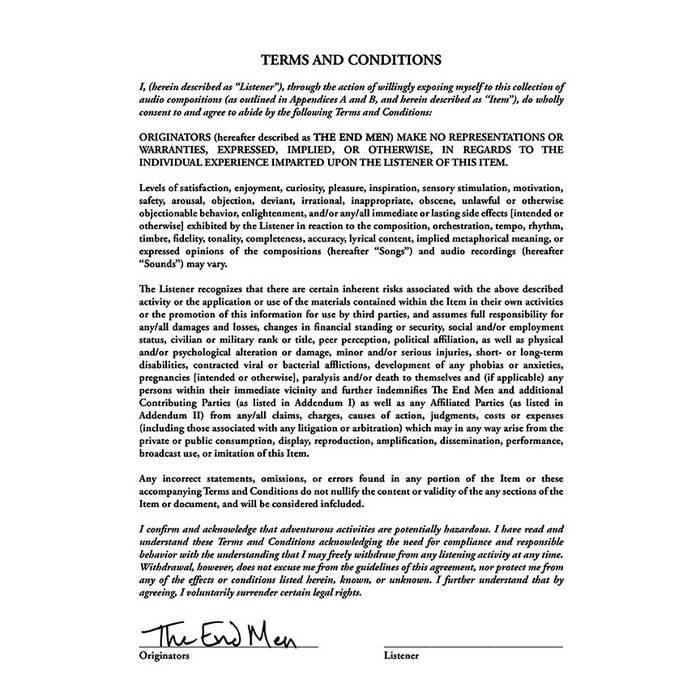 I've been a fan of the End Men's dirty blues since I've started this blog. For me, though, I find the music to be a little heavy for casual listening. Hendershot and drummer virtuoso Livia Ranalli are experts at hard-hitting blues, though I felt their last two albums painted with a thick brush. With the addition of Matthew Elia's saxophone on Terms and Condiitons, the duo's sound is not only lifted with some tonal variety, but it creates a truly unique dynamic that will definitely be rewarding on further listens. In stretching beyond the limitations (however self-imposed) of the genre, the End Men are proving their chops as artists and as bluesmen (bluespeople?) This is great stuff.

The End Men -- Official, Facebook, Bandcamp
Posted by Rachel Cholst at 12:00 AM