Butchers Blind -- A Place in America

I first wrote about Butchers Blind two years ago but I only just managed to see them play live, where they completely crushed it. Lead singer Pete Mancini tends to be softspoken on his recordings, but there's a real power to these songs if you get to see them live. A Place in America, which will be released on October 23rd, is a continuing testament to the band's mastery of bar band country ennui. 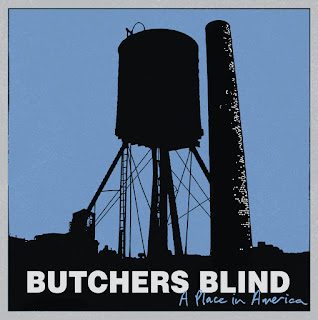 It's important to note that Butchers Blind is a country band from Long Island. This matters. First of all, I think us Northeasterns are just morose in a different way than the Southerners or Midwesterners who tend to live in my headphones. We're more densely packed and the divide between the wealthy and the normals are simply starker. Especially in Long Island. The songs on A Place in America confront this disparity with careful imagery -- decaying suburbs and aging boomers. Then there's "Ghosts," a classic take on lost teenage love that suggests disappointment that a nice childhood in the suburbs didn't produce the life that was promised to them.

The common saying goes that folk music is sad because the folk are sad. But this is a sadness that's closer to my native language. A Place in America may be sixsongs, but it packs a huge punch.

If you're in the area, Butchers Blind will be playing a release show on 10/24 (a Sunday) at the HiFi Bar in the jewel of America (New York City, that is).