Stephen Chopek -- Things Moving On Their Own Together

Stephen Chopek's debut album has an impressive story behind it. Chopek is a trained jazz drummer who has toured with a wide variety of acts, including John Mayer, Jesse Malin, Marc Broussard, the Alternate Routes, and the Pimps of Joytime. About six years ago he decided to learn how to play guitar...by busking in the subway for 7 hours a day. If that's not enough risk-taking for you, Chopek wrote the songs on these recordings as he played them. 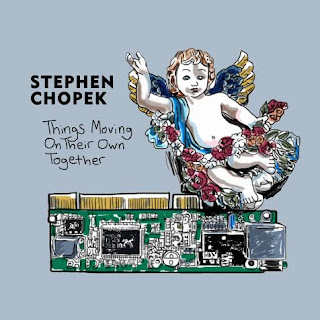 This technique gives the songs a loose quality, but sometimes that translates into a rough quality. For example, on "Slower You Go," Chopek rhymes "years" with "peers" on the one hand (I'm not a fan of rhyming for rhyming's sake, but that's just me.) On the other hand, seconds later, he busts out with

Every season has a right to life
In spite of suffering
Turmoil and strife
Devil put god in exile
And hungry, poor huddled masses out of style

The ultimate effect is a Dylan-esque stream-of-consciousness style and -- let's be honest -- Bob didn't always hit it out of the park. While Chopek's exuberance is a big part of the album, he's at his best when his pace is more measured, as on "Only Here," or when the urgency best fits the song, like on "Staying." Nevertheless, Chopeks' zest for experimentation will take him far.