Jeff German and the Blankety Blanks -- 12 Packs, 8 Packs, and Black and White TV

You may remember Jeff German's first album from a few years ago. It was a barnstormer of a Midwest rock album. 12 Packs, in contrast, is a more sober affair. German, best known for the Cur Dogs and as a backing musician for other Columbus acts like Lydia Loveless, is a straightforward lyricist. The songs get their punch from the way German and the Blankety Blanks sell the them: no frills and with 100% commitment. 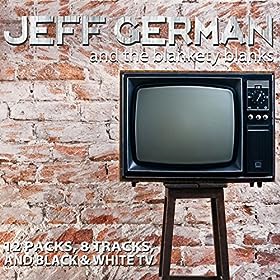 The Blankety Blanks show they can dig in to to the bleak prairie loneliness of "Hang On" (which features another Lydia Loveless sideman and regular Adobe & Teardrops customer, Todd May) just as well as the for-friends-only jam "Woodshed." These may not be complex songs, but they sure do capture a wide range of emotions.


Jeff German and the Blankety Blanks -- Official, Facebook, ReverbNation, Bandcamp, CDBaby, purchase the new album on Amazon
Posted by Rachel Cholst at 12:00 AM