Becky Shaw -- shut down, jump in

If you've been paying attention to this blog for a while, you've already heard Becky Shaw's work with alterna-grass band Roxie Watson, and in Sonia Tetlow's work over the years. Though Shaw has been an Atlanta indie rock staple for 25 years, shut down, jump in is her first solo album. As they say, it takes a lifetime to write your first album. In this case, it was worth the wait.

Before I get into the music itself, the album is a veritable who's-who of Atlanta-based musicians. What makes me happiest, though, is that Lee Kennedy, my favorite bassist in the whole wide world (and I've listened to over 600 albums just for this blog) is on almost every track and is, as usual, transcendent. Kennedy makes the bass speak in tongues that most of us only dream of. And he makes it seem so easy. Additionally, Roxie Watson (the band) swings by to play on "Little Boy Beauty Queen." The clear sense of love, trust, and community in the ensemble makes the songs especially potent. 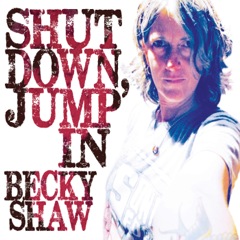 All of these songs are love songs but, strikingly, they don't focus on romantic love. (Perhaps the difference between a 20-something singer-songwriter and someone who's actually lived for a little while.) "Wishin' Anyway," the album opener, hit me especially hard during the holidays -- a song to reminisce about lost relatives and childhood memories. "The Veil" and "Outside Under" call to mind Shaw's art rock days in her 90s band, Reversing Hour. While the album generally has a roots feel, though, Shaw's interest in experimentation and pushing boundaries is present throughout. Even though I wasn't enamored with some songs at first listen, I appreciated Shaw's craftsmanship. It goes without saying, though, that after repeat listens (and checking out the lyric booklet, which I recommend), I have gained a deep appreciation for Shaw's labor of love. Here's hoping we get that sophomore album sooner rather than later. Listen to "Wishin' Anyway" below.

Purchase shut down, jump in via CD Baby or iTunes