The Haymarket Squares -- Light It Up

They Haymarket Square have a certain rogue-ish charm that makes the harsh medicine of their lyrics -- incisive, biting political commentary -- go down easily. It was love at first sight with the band's gospel take on "Heaven," with an oily-smooth crooner testifying:


I was moved one Sunday morning
By the songs of Sister Tharpe
To wonder ‘bout salvation
And when it’s going to start….

The Haymarket Squares, however, deal primarily in punk-inspired bluegrass, which makes a good deal of their music sound somber. But hey, we live in serious times. 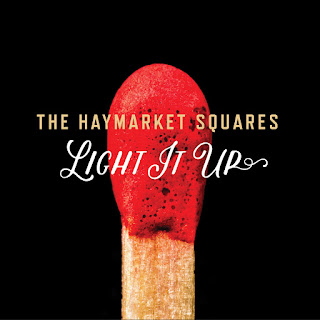 The band's as adroit at four-part harmony as they are at penning lyrics. That's what makes for political music that is both immediate and enjoyable. (Hopefully, however, these songs won't be timeless, though I suspect the yokes of unemployment, racism, nationalism, and neoliberalism will burden us for a long time to come.) The Haymarket Squares are clearly rooted in the protest songs of the early 1900s, but sometimes that works against them. Frankly, there's something a little grotesque about a group of white(-seeming) guys singing

when, as I'm sure the members of the band knows, the population of those who are incarcerated is disproportionately people of color. On the other hand, the band is aware that sometimes, writing great music isn't always enough to help the movement:

Well it’s easy to stand on a soapbox
And tell the world what’s going wrong
But in court or the street, in this miserable heat
You need more than just catchy songs

I want to inspire, not preach to the choir

I'm not sure what the Haymarket Squares do at shows other than deliver an amazing concert (as is all too clear on their performances in the recording), but I hope they also educate their audiences. Nevertheless, when these songs are listened to carefully, they'll inspire you to get off your soapbox and take some action.